Days after the birth of her daughter Ayat, Arpita Khan Sharma shared an adorable photo of her kids, son Ahil and daughter Ayat on her Instagram stories

Salman Khan's sister Arpita Sharma recently gave birth to her daughter Ayat on the actor's birthday on December 27 and the Khan family members posted their warm wishes and blessings for the newborn on social media. Earlier on Sunday, Arpita Khan took her Instagram stories and shared the cutest photo of her son Ahil with daughter Ayat. Little Ahil can be seen standing over and gazing at his newborn sister as she sleeps peacefully. 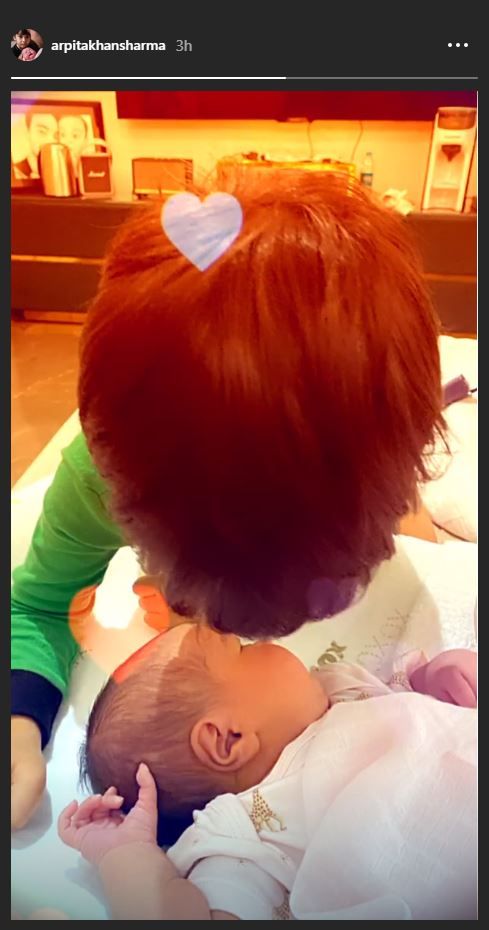 No one can meet Ayat without Ahil's permission

Aayush Sharma shared an adorable anecdote with the media during his recent interaction with a leading national daily. The Loveyatri actor is on paternal leave for two weeks because he doesn't want his daughter to forget him.

Talking about Ahil's reaction after seeing Ayat, Aayush said that he has suddenly become an overprotective brother and doesn't let anyone meet her without his permission. He further said that Ahil, in the beginning, thought that the baby would be of his size and he will start playing with her. But he was surprised to see her. 'Papa she is too small and squishy, like a doll,' he had exclaimed. "He calls her Hyaat," Aayush concluded.

Read | Aayush Sharma: 'It was a conscious decision to welcome Ayat on Salman Khan's birthday'

Before unveiling Ayat’s first picture, Arpita and Aayush Sharma posted a picture announcing the arrival of the baby. They thanked everyone for their blessings. The caption stated that they are blessed to have a baby girl. Later in the day, Aayush uploaded several pictures featuring the Sharma family- him, Arpita, Ahil and their princess Ayat.