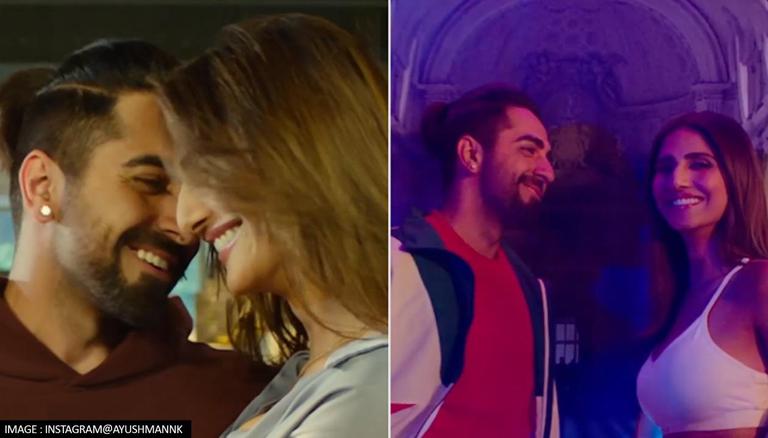 
Makers of Ayushmann Khurrana and Vaani Kapoor's Chandigarh Kare Aashiqui have released the film's title track, which falls nothing short of a party anthem. The groovy track comes as the reprised version of Jassi Sidhu's chart breaking Punjabi track, wherein the leading duo can be seen flaunting their Bhangra moves. The song has been crooned by Sachin-Jigar along with Sidhu & IP Singh and showcases myriad stills from the romantic comedy.

Taking to his Instagram handle on Saturday, November 13, the Vicky Donor star uploaded a glimpse of the track, wherein the duo is seen gelling along during various outings. They also don their athleisure to groove to the Punjabi Beats of Jassi Sidhu's track. For the caption, he wrote, "Bhangra Aashiqui =Manu  Maanvi! #ChandigarhKareAashiqui title track out now: link in bio
In cinemas on 10th Dec." Take a look.

READ | Ayushmann Khurrana on 2 years of 'Bala': 'Such films were defining what cinema should be'

The film's recently released trailer showcases Manu and Maanvi crossing paths in a gym, which has been rented out equally to them. Ayushmann Khurrana's romance awakens as he witnesses Vaani Kapoor's Zumba sessions. The tale takes a twisted turn when Maanvi is revealed to be a trans woman. Bankrolled by T-Series in collaboration with Guy In The Sky Pictures, the film is set for a theatrical release on December 10, 2021.

The film's shooting commenced in Chandigarh last year, keeping in line with all the COVID-19 restrictions. The film's first look posters came out earlier this month, wherein Ayushmann and Vaani can be seen in a lip-locked pose. “Tis the season of sass, drama and AASHIQUI", Vaani wrote at that time.

Meanwhile, Khurrana will be seen in Doctor G as well as Anubhav Sinha's directorial Anek. On the other hand, Vaani, who was last seen in Akshay Kumar's  Bell Bottom, has Karan Malhotra's Shamshera, alongside Ranbir Kapoor and Sanjay Dutt.