Bhagyashree shared adorable throwback pics to wish BFF Sheeba on her birthday. The series of pictures depict a fun story of their bond and love for each other.

Bhagyashree marked her Bollywood debut with the movie Maine Pyar Kia and even won an award for the best debut female. The actor has also worked in several regional cinemas and has appeared in more than twenty films since then. Recently, Bhagyashree had a beautiful birthday wish for her best friend Sheeba Akashdeep Shabir.

Bhagyashree shared a series of throwback pictures with her best friend Sheeba on the occasion of her birthday. In the first picture, they are seen striking a pose with flowers. The other three pictures are candid shots of the duo dancing, kissing and having fun with each other. The actor also penned down a special wish for Sheeba as she wrote, “My spunky, vivacious, fun-loving Sheebster, here's wishing you a lifetime of smiles and laughter, health and happiness, & travel n adventure.
Happy birthday ðŸŽ‚ðŸ¥‚ Love you my bestie.” Her best friend Sheeba also commented on the picture thanking her for a beautiful birthday wish. 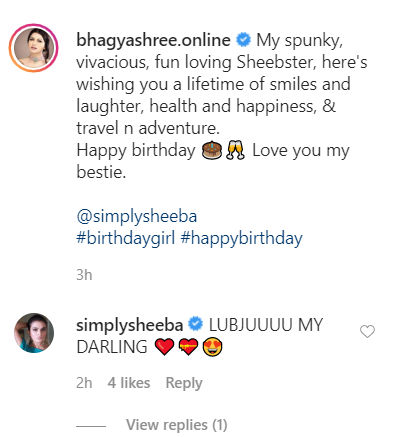 Amid lockdown, Bhagyashree has been sharing several home workout routines with her husband. In a video shared by Bhagyashree, she is seen enjoying with her husband while they try to ace the Koala challenge. In the two videos, the first video is all about the duo trying and failing at the challenge and in the next video, they succeed in completing the challenge. However, they cannot get stable after completing the whole challenge and Bhagyashree slips down on the floor. The actor tags it as laughter therapy as she wrote, "Laughter Therapy!!! Sunday is funday... see what happens when we attempt the #koalachallenge ðŸ˜…ðŸ¤£ðŸ¤£ðŸ¤£ðŸ¤£".