Bhagyashree who is actively sharing pictures of her work-out regimes, recently shared a video where she can be seen completing the #Koalachallenge with husband

Amid coronavirus lockdown, it seems that actress Bhagyashree has pledged to stay fit and healthy, setting major fitness goals for others. The Maine Pyaar Kiya actress who is actively sharing pictures of her work-out regimes, recently shared a video where she can be seen completing the #Koalachallenge with her husband Himalaya Dasani.

The actress shared a series of videos of partner workout sessions on her Instagram. The actress captioned the video as ‘Laughter Therapy!!! Sunday is funday... see what happens when we attempt the #koalachallenge.”

In the video, Bhagyashree is seen trying to firmly lean on the body of her husband as part of the challenge but, every time she puts in her effort, she slips. In the second video, she is clinging on to her husband who is standing still but, later slips down on the floor laughing out loud. The two videos of continuous struggle by Bhagyashree to complete the challenge will surely leave you in splits.

Read: WATCH | Bhagyashree Talks About Separation From Husband; Calls It A 'scary Phase'

Laughter is the lifeline of every relationship

Bhagyashree who took the challenge sportingly despite facing failure even commented under the video for her fans and wrote that people can slide right to watch the kind of attempts she made to complete the challenge and how it failed. Her daughter Avantika Dassani wrote a hilarious comment where she asks people to send in help for her parents.

Apart from Bhagyashree, several fans of the actress flooded the comment section with their hilarious takes. Some praised the actress while others took inspiration from the video. Taking the video as an adorable gesture by the couple who are spending time together, a user wrote, “Awww love it... love you guys.” Another user wrote, “Himalaya par chadai...not an easy task.” A third user appreciated Bhagyashree for taking up the challenge and wrote that laughter is the lifeline of every relationship. 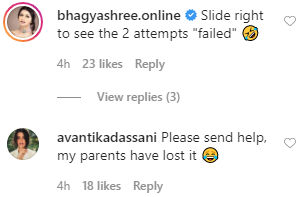 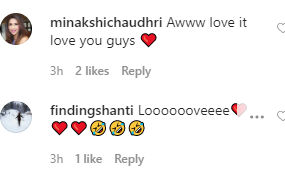 PEOPLE HAVE PLEDGED SO FAR
LATEST NEWS
View all
39 mins ago
Karisma kapoor, kareena kapoor khan shell out sister-goals, sport same green face mask
52 mins ago
Nushrat bharucha's throwback pics from her friend's wedding is every girl-squad's dream
1 hour ago
Alia bhatt's characters in 'raazi' and 'kalank' had quite a few similarities
1 hour ago
Bhumi pednekar's movies helmed by first-time directors; check out the list
1 hour ago
Bhumi pednekar to nia sharma, celebrity-inspired festive looks to try and glam up right