Bhumi Pednekar took to social media to share a few stills of herself from 'Pati Patni Aur Woh'. But one particular actor's comment garnered all the attention.

Bhumi Pednekar was last seen in a full-fledged role in Pati Patni Aur Woh. Her role as Vedika Tripathi was lauded by the audience. She recently took to social media to share a few stills of herself from the movie, Pati Patni Aur Woh. Read about a celeb's response to her post:

Aparshakti Khurana says “I love you” to Bhumi Pednekar

Bhumi Pednekar recently took to social media to share a few stills from her movie, Pati Patni Aur Woh. She did so because the film was having its first-ever television broadcast yesterday. The post had Bhumi Pednekar’s character in different scenes showcasing varied moods throughout the film. She even captioned the picture as, “The many moods of #VedikaTripathi”.

When Bhumi Pednekar uploaded this post, many fans were quick to comment on how they loved her character from Pati Patni Aur Woh. However, there was one comment that took away all the attention. Her co-star from the same film, Aparshakti Khurana, commented below the post how he loved Bhumi Pednekar in the film.

Aparshakti Khurana also added, “Bhumiiiiiii I love youâ¤ï¸â¤ï¸just saw the film for a bit, couldn’t take my eyes off you”. Bhumi Pednekar’s ‘Pati’ from the film aka Kartik Aaryan also commented, “Vedika Ji” below the post. Aparshakti Khurana played the role of Kartik Aaryan’s best friend in the movie. He referred to Bhumi Pednekar as ‘bhabhi’ throughout the film. The brother-sister chemistry that the two shared on-screen was adorable. 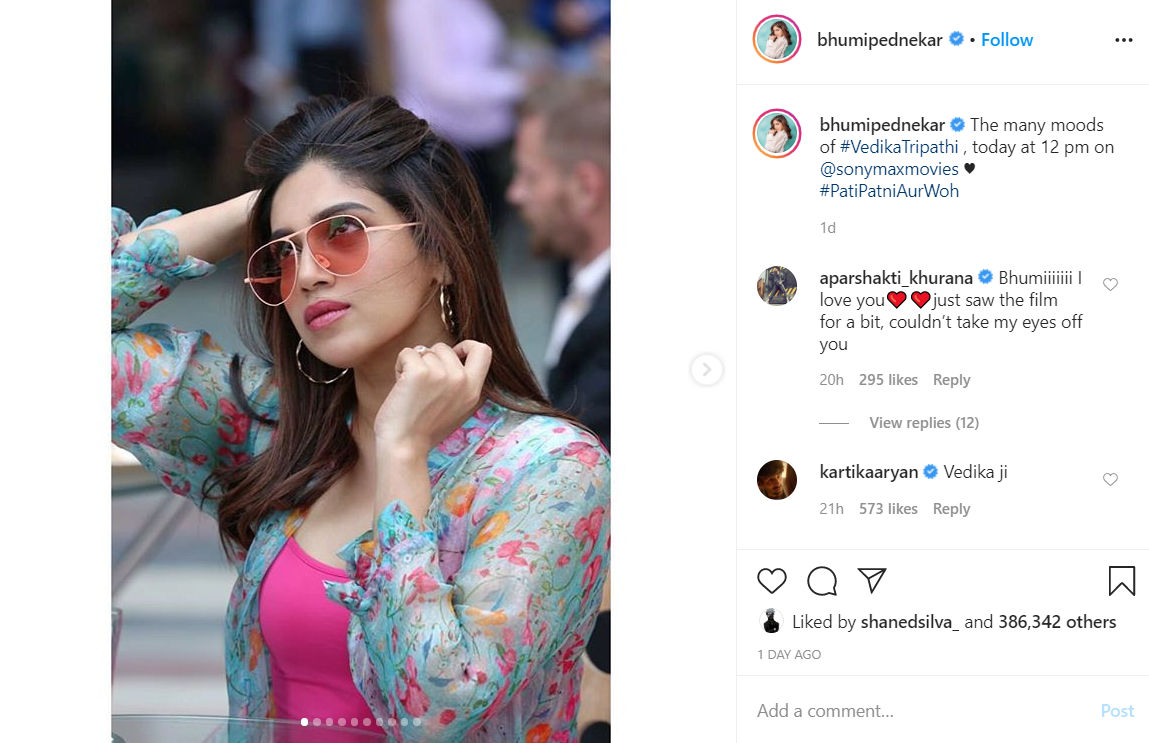 On the work front, Bhumi Pednekar is currently filming for her upcoming flick, Durgavati. It is a remake of G Ashok’s 2018 Telugu horror flick, Bhaagamathie. Bhumi Pednekar will also be seen in Dolly Kitty Aur Woh Chamakte Sitare. The film is directed by Alankrita Shrivastava of Lipstick Under My Burkha fame. The film also stars Konkona Sen Sharma alongside Bhumi Pednekar.