Pak Troll Tells Adnan Sami 'keep Calm, What If You Have To Return', Singer Hits Back

A Pakistan troll told Adnan Sami to 'keep calm' since he might have to return to Pakistan. Adnan said he had 'returned', referring to his Indian citizenship.

Adnan Sami is often at the receiving end of Pakistani trolls, more after he took up Indian citizenship. However, the singer-music composer never takes it to his heart, and in fact, makes headlines for some of his intense and sometimes funny responses. The Lift Kara De singer once again proved his sense of humour when a troll targetted him, asking him to keep calm to 'save face' in case he had return to Pakistan. The music composer replied that he had indeed ‘returned’ referring to his taking up the Indian citizenship.

READ: Adnan Sami On Pakistan Trolls: 'They Can’t Digest That I've Become Indian, Their Beliefs About India Are Wrong'

Adnan Sami recently defended the Government after it successful got the controversial Citizenship Amendment Bill passed in the Parliament. He even replied to a popular YouTuber, who raised concerns over the bill, “Better for you to read the bill & it’s purpose before becoming Robin Hood!” A Pakistan user was not pleased with Adnan’s reply and posted, “Itne maat karo ke agar wapis Ana pade toh atleast have something for face saving.” (Keep calm, in case you have to return, at least have something for 'facesaving'). Adnan hit back, “Waapas hee tho aya hun beta!” (sic) (I have indeed returned). Netizens termed it as a 'befitting reply.' 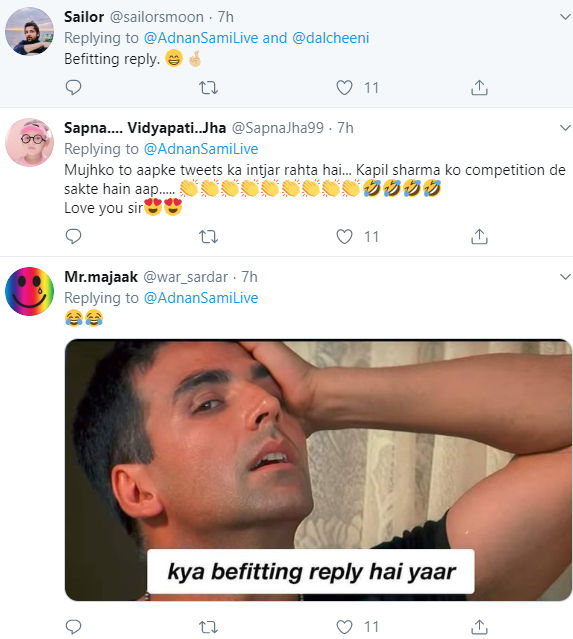 READ: Adnan Sami Backs CAB, Says 'It Is For Religions That Are Persecuted In Theocratic States'

He added, “They can’t digest the fact that I have become an Indian. Their narrative has been that Indian Muslims are treated unjustly. I have spent 17 years here, I observed what happens here and I understood that whatever they published and believe there is completely wrong. That’s how I decided that I want to be an Indian. They wonder why a person with an influential background, my father worked in the government, could leave everything and come to India. ‘Is something wrong with our country?’ they ask. Of course, there is something wrong.”