Just days away from release, Deepika Padukone's Chhapaak has been mired into a controversy with the Rajasthan fringe group Karni Sena issuing a notice over it

Deepika Padukone's prestige project Chhapaak has landed in hot water yet again. With a copyright violation already sparking a row, fresh rumours have surfaced claiming that the acid-attacker's religion in the film has been changed.

The film is based on the real-life story of Laxmi Agarwal, an acid attack survivor, being played by Deepika Padukone. Her case had made headlines in 2006 when she was attacked with acid by a man named Nadeem Khan aka Guddu for rejecting his proposal.

Reacting to the religion-switch rumour, the Rajasthan based fringe group, Karni Sena in a notice threatened the makers over the release of the film. Claiming that if Chhapaak is aired in any movie theatre across states, the latter will be the sole one responsible.

The one-page document also informed that the group has written a letter to the Central Board of Film Certification (CBFC) demanding that it be banned as the name of the culprit in question has been changed. 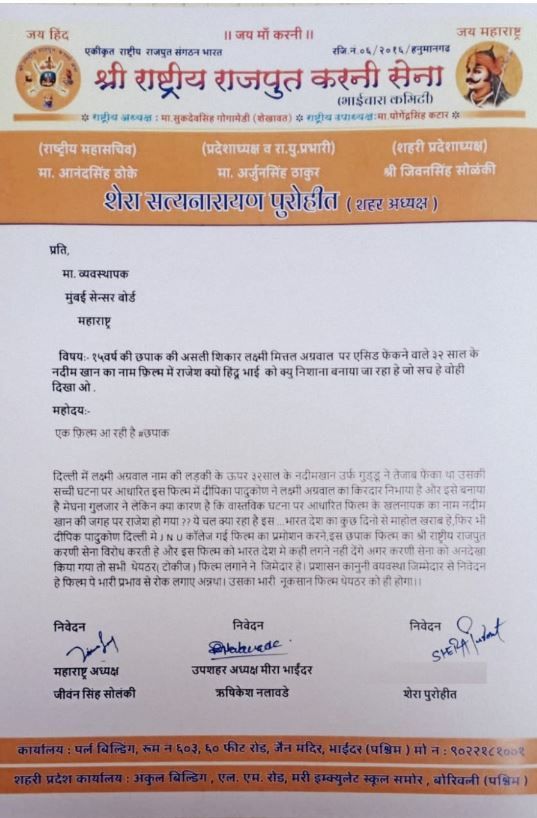 Just hours before Karni Sena's ultimatum, BJP Rajya Sabha MP Subramanian Swamy wrote that fellow advocate Ishkaran Bhandari is planning to send a legal notice to the makers if the name of the accused, who was a Muslim, is changed to a Hindu name.

Ishkaran is drafting a legal notice to Deepika Padukone & producers, if they have changed name of accused from Muslim in real life to a Hindu name.

However, upon research, no mention of the attacker’s religion or name is evident in the trailer of the movie. On the contrary, as per the Wikipedia article of Chhapaak, the name of the attacker was changed to a Hindu name ‘to save minority interests and to keep it secular.’

READ:  JNU VC Asks Deepika Padukone: Why Only One-side, They Should Listen To Innocent People Too

This is not the first time the fringe-group has given a warning over a film's release. Before Chhapaak, the Karni Sena issued notices regarding Arjun Kapoor-starrer Panipat, claiming the film portrays Maharaja Surajmal of Bharatpur in a negative light and the sequence in question has hurt the sentiments of the people.

Prior to this, the group was up in arms against the release of Article 15 as well. The Karni Sena is not the only one this time as the International Brahmin Mahasabha and Parshuram Sena have also protested against the portrayal of caste equations in the Ayushmannn Khurrana starrer.

The Karni Sena and Deepika Padukone are, of course, well acquainted, as the former had fiercely protested the release of Sanjay Leela Bhansali's Padmaavat (even forcing its name to be changed from the original Padmavati) alleging distortion of history.

READ:  Should Deepika Padukone Visit RSS In Nagpur If Not JNU?: Congress