Ekta Kapoor penned a note for her dear friend Smriti Irani in a long heartfelt post on Instagram. Read further to know more about the post

Ekta Kapoor is one of the most renowned producers in the Indian television space. She has produced a number of  shows which went on to become huge successes. Even today, some of her shows top the TRP charts. However, one of her most notable shows was Kyunki Saas Bhi Kabhi Bahu Thi, starring Smriti Irani.

Smriti Irani has quit acting and transitioned into politics. Ekta and Smriti first met on the sets of Kyunki Saas Bhi Kabhi Bahu Thi and became friends immediately. The series was one of the most popular series of all time and garner amazing TRPs during its run. The family drama show was loved by all and became a regular household name.

A few days ago, the world celebrated International Women’s Day, and thus Smriti too joined in and tagged Ekta in an adorable post which she shared on her Instagram. Smriti in the caption of the post wrote a heartfelt note about strong women. A few days after that, Ekta re-shared the same picture with a long reply for Smriti.

Ekta addressed their friendship and called Smriti a wonderful multi-tasker and an all-rounder. Ekta also called Smriti a perfect parent. Ekta mentioned that she celebrates their friendship every day as she cherishes the bond that they both share with each other. Smriti Irani commented on the post saying "I love uuuuuuu". This adorable gesture was praised by their followers. 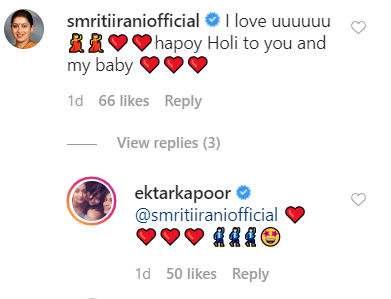 PEOPLE HAVE PLEDGED SO FAR
Kriti Sanon & Diljit Dosanjh's pics will make you want to see the pair again on big screen
Disha Patani opens up about competing with contemporaries Janhvi Kapoor and Sara Ali Khan
Neha Kakkar has collaborated with THESE Punjabi artists over the years
Times when Akshay Kumar proved he is a generous actor; Read on
'Sholay' trivia: When Amjad Khan almost lost the role of Gabbar Singh
DO NOT MISS
5 MEN ARRESTED FOR BEATING ENGINEER
COVID-19: DOCTORS WRITE TO MHA
2ND COVID STIMULUS PACKAGE?
TABLIGHIS FACES CRITICISM IN PAK
RAJAPAKSA THANKS PM MODI
THACKERAY NOMINATED TO COUNCIL