Farah Khan Proud Of Own 'foresight' With 'Coronavirus Masks In 2004', See Hilarious Post

Farah Khan expressed her pride about her own 'foresight' after showing 'coronavirus masks in 2004'. She shared a still from her debut film 'Main Hoon Na.'

While coronavirus is spreading panic across the globe, a section is also looking at it in a light-hearted manner. Be it memes, funny posts over the pandemic or other events around it, there has been a lot that has brought a smile on people’s faces amid the worry. Farah Khan was one of those who had a fun-filled take over people taking precautions with masks.

The choreographer-turned-director shared a still from a hilarious sequence in Main Hoon Na where Satish Shah, as a professor, accidentally spits on students while talking and students wear masks to remain protected.

Farah shared how she showed ‘foresight’ with the ‘corona masks’ way back in 2004. 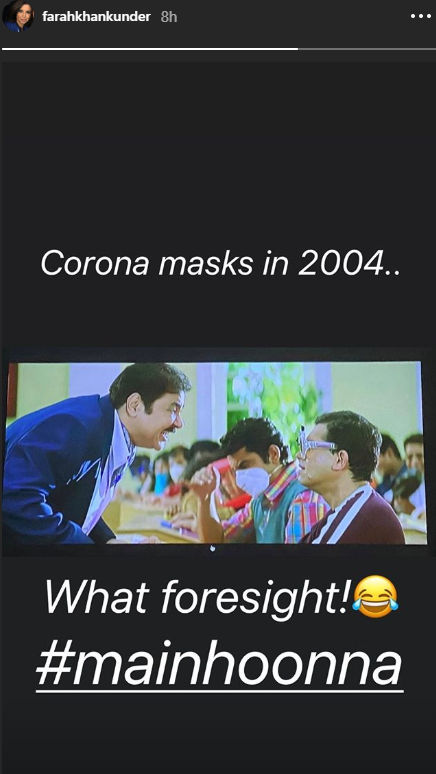 Main Hoon Na was Farah’s debut directorial starring Shah Rukh Khan, Amrita Rao, Zayed Khan, Sushmita Sen, Kirron Kher, Suniel Shetty, among others. The action-drama, revolved around SRK’s character of an Armyman while being tasked with the duty to protect Amrita Rao in her college and reconciling with his stepmother and half-brother.

The above-mentioned scene takes place in the college, where SRK’s character joins as a student.

Earlier, Farah had an interesting take on kids getting holidays due to the virus outbreak, and how they planned to spend the ‘staycation’ with games like Pictionary, while taking care of one’s health.

Meanwhile, the entertainment industry is set to get a two-week break with film shoots being put off till March 31 amid the coronavirus threat. Film associations made the decision in a meeting on Sunday. This is after numerous films like Sooryavanshi release was pushed ahead and shooting of films like Jersey was put on hold.

READ: Malaika Arora Goes Vintage With Saree, Farah Khan Wants Her To 'dress Like This Every Day'

PEOPLE HAVE PLEDGED SO FAR
Lilly Singh starts a fundraiser for COVID-19 and busts myths surrounding the virus; watch
Like Jacqueline Fernandez in 'Genda Phool', these actors nailed Bengali look on screen
'This could be a potential bio-war', says Kangana Ranaut as she talks about coronavirus
Ranveer Singh & other actors who are working out at home amid COVID-19 lockdown
Mandira Bedi's fitness videos will inspire you to workout at home amid COVID-19 lockdown
DO NOT MISS
TATA TRUSTS PLEDGES RS 500 CRORES
HEALTH MINISTRY BRIEFING ON COVID
PUTIN'S YELLOW HAZMAT SUIT
RAMDAS ATHWALE DAY 4 OF LOCKDOWN
DELHI GOVT DISTRIBUTES RATION
GOOGLE'S 3D ANIMAL FEATURE