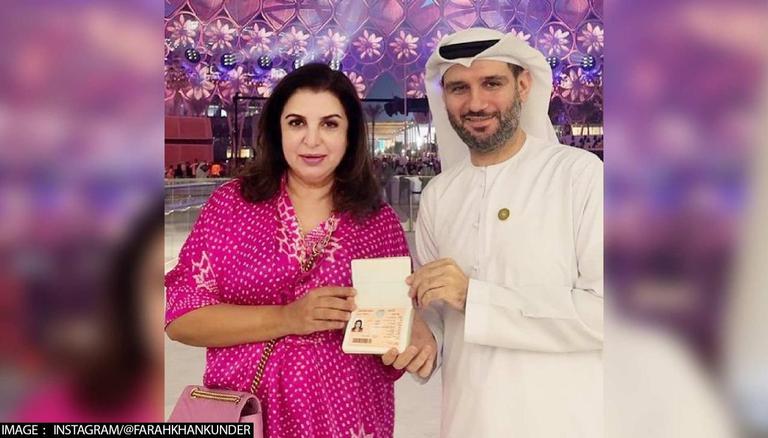 
After Boney Kapoor, Sanjay Dutt, and Dulquer Salmaan, filmmaker-choreographer Farah Khan is the recent celebrity to receive the UAE Golden Visa. Farah took to Instagram and shared a picture while posing with her Golden visa and thanking the UAE government for the honour. The filmmaker penned a note and informed that she received the visa for her contribution to Indian cinema.

The actor also thanked Dubai Film and TV Commission for supporting the creative people. She received the visa at the Dubai Expo. “However much we deny it, it always feels good to be appreciated... I’m so honored to receive the Golden Visa in @uaeatexpo at @expo2020dubai. For my contribution to #indiancinema, for my achievements in films n especially for the connect #happynewyear has with Dubai. Thanks to Dubai Film and TV Commission 4 supporting the creative people @filmdubai @aljanahi, (sic)” she wrote while thanking the Dubai authorities for their love and honour.

The Golden Visa was instituted by the UAE government in 2019 as a new system that allowed investors (minimum of AED 10 million) and entrepreneurs, as well as professionals and specialised talents from various walks of life including science, knowledge, and sports to become a contender by applying for it. These golden visas are issued for five or ten years and are subjected to renewal accordingly. In the past, cine stars who have been granted the Golden Visa by Dubai include Sanjay Dutt, Suniel Shetty, Mammootty, Mohanlal, Tovino Thomas, and Dulquer Salmaan among others.

Farah Khan’s famous film Happy New Year that starred Deepika Padukone, Boman Irani, Sonu Sood, and  Abhishek Bachchan, was a hit in the Middle East as most of the film was shot in Dubai and hence the dance comedy flick received a lot of love in the country.

Earlier, Dulquer Salmaan took to social media to express gratitude for the honour bestowed upon him. The actor received the prestigious 10-year golden Visa from the Department of Culture & Tourism of the Abu Dhabi government. The Emirate officials including Abdul Aziz al Dosari, director, Yusuff Ali MA, chairman of Lulu Group, Badreyya Al Mazrooei from TwoFour FiftyFour, and vice-chairman of Abu Dhabi Chamber of Commerce had presented the actor with the Golden Visa.

WE RECOMMEND
How to get UAE Golden Visa? Everything you need to know about who is eligible to apply
National Film Award winner B Praak says he is 'honoured' to receive the UAE Golden Visa
Farah Khan-Anu Malik did not join hands after 'Main Hoon Na' success; Duo shares why
Kartik Aaryan reveals Kiara's 'old man' look from 'Bhool Bhulaiyaa 2' but there's a twist
'Call My Agent: Bollywood' trailer highlights lives of agents, the 'star makers'
Listen to the latest songs, only on JioSaavn.com