As the Jamia Millia Islamia University turned into a battlefield on Sunday night, Bollywood celebrities like Konkana Sen Sharma, Adil Hussain, Yami Gautam, Soni Razdan and Hollywood actor John Cusack came out in support of the students. 'Kaabil' actress took to her Twitter handle and wrote: "Keeping any political ideologies aside, it’s highly imperative to safeguard our human rights! Whatever happened with these students, these girls, JUST NOT DONE! The basic premise of democracy cannot be challenged & disrespected."

I strongly condemn the violence that the police have shown in dealing with the students. In a democracy the citizens have the right to peacefully protest.I also condemn any kind of act of destruction of the public properties. Violence is not the solution for anything!

However, I’m also shocked seeing how the protest turned violent. Let’s aim to make our country better through dialogue, debate and dissent and keep our faith in democracy alive.

Violence is not a tool to make our country better. We are a democracy and we have the power to exercise our fundamental rights in a rightful manner. What the students faced has shaken me and my heart goes out to them and I protest the way the situation was handled.

Many on social media noted the usual silence of top stars, directors, and producers in Bollywood but there were many who voiced their support for student protests. "Serendipity" star Cusack also took note of the videos from inside the campus, which were circulated widely on social media. South star Siddharth tweeted, "These two are not Krishna and Arjuna. They are Shakuni and Duryodhana.  Stop attacking #universities! Stop assaulting #students! #JamiaMilia #JamiaProtest." 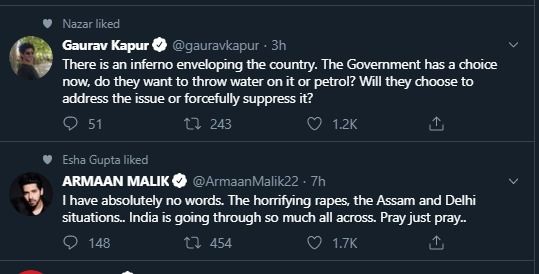 Actor Ali Fazal said now was not the time to stay silent, irrespective of one's ideological divide. "It's funny, I felt, hey Ali, let's play it safe all these years. And now I can't. A lot of my colleagues may not speak up at all. But I pray we all realise there is no job, no career above humanity. Socho, aur time kam hai toh act fast (Think, and if you have no time, then act fast). Irrespective of your political ideologies right now," he said.

It shocks me, how many educated, seemingly rational people I know are completely bigoted. And not just on religious lines, but also on the lines of caste.

We are with the students! Shame on you @DelhiPolice

In this frame you can see the Bhagwat Geeta, a Christmas Tree and a frame that says Ya Ali Madat. Proud to say that’s my house and my dear husband reading out the preamble of the Constitution of India. My home ... My India. Any religion not seen in the frame is also welcome 🙏 pic.twitter.com/GLCbmksFHa

In All THESE chaos of NRC and CAB, #CitizenshipAmendmentBill I am most concern and deeply saddened that the fundamental "identity" of ours as human is massacred. In this fight no body will win. Everybody will loose. The greatest loss of our times will be humanity itself.

When we were born, our families had cheered because our mothers had given birth to a Human & not a squirrel! We were born a human FIRST. If we cannot retain, protect & celebrate the PRIMARY identity than what's the USE of calling ourselves a Muslim, Hindu, Assamese or a Bengali?

Assam, very painfully slowly, was recovering from 2.5 decades of unrest from 1979. Things were becoming a bit normal. Now, the wisdom of our Leadership failed to understand the complexities of Assamese cultural fabric. The decision to impose CAB is the most unwise ever.

According to PTI sources, the situation continues to be tense with many women students preferring to leave the campus for their homes. Many students feel they are not safe even inside the campus. The varsity had declared winter vacation from Saturday till January 5 and even postponed the exams.

As many as 50 students, who were detained during protests at the Jamia Millia University in Delhi on Sunday, were released in the early hours of Monday, police said. Of the 50 students, 35 were released from the Kalkaji police station and 15 from the New Friends Colony police station, a senior police officer said. Students at Police HQ raise slogans against PM Modi, Home Minister Amit Shah, and Delhi Police amid protests on Sunday evening. The clash erupted during a protest by students of Jamia Millia Islamia. However, a students' body later said they had nothing to do with the violence and arson and alleged that "certain elements" had joined in and "disrupted" the demonstration.