Anurag Kashyap who took a break from Twitter on August 10, came back to the platform and said that he can't stay silent any longer after Anti-CAA Delhi protests

Bollywood Filmmakers like Anurag Kashyap, Anubhav Sinha and Alankrita Shrivastava, has expressed concern about the students of the Jamia Millia Islamia after several of them were injured during violent protests against the amended Citizenship Act. The stars took to their Twitter handle to express their opinions on the massive protests in Delhi. Protestors torched four public buses and two police vehicles in New Friends' Colony near the university during a demonstration against the act, leaving nearly 60 people including students, cops and fire-fighters injured.

The university had turned into a battlefield on Sunday as police entered the campus following protest against the Citizenship Amendment Act, which led to violence and arson. Kashyap who took a break from Twitter on August 10, came back to the platform and said that he can't stay silent any longer. Shrivastava studied filmmaking at Jamia Milia Islamia in New Delhi, also took to Twitter to express her opinion.

This has gone too far.. can’t stay silent any longer . This government is clearly fascist .. and it makes me angry to see voices that can actually make a difference stay quiet ..

Welcome back Kashyap. Was missing you here. @anuragkashyap72 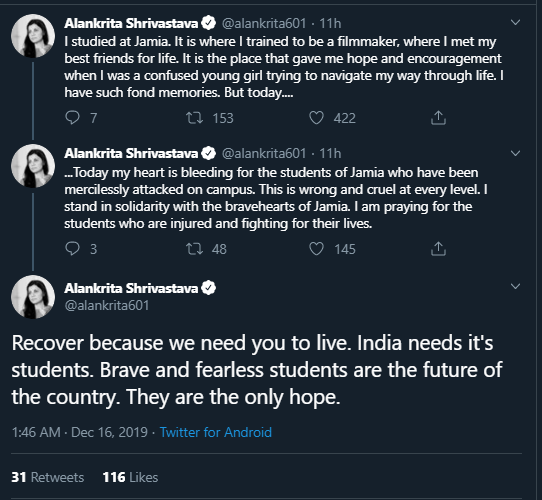 Delhi: VC of Jamia University clarifies on the student protests against CAA

Dear Icons! Films. Sports. Arts. Politics. Literature. Etc. We chose what we chose because most of us didn’t want to be Government servants. Guess what.... you all now are GOVERNMENT SERVANTS!!! Bwahahaha

When no one has the answers, students do. Look at history worldwide.

And stop questioning just the movie stars. There are other ‘ICONS’ too who ‘copy paste tweets’ on every thing jingoistic. QUESTION ALL OF THEM!!! Tell them to at least post dictations. Cricketers. Writers. Singers. Athletes etc etc. TAG THEM.

And my industry mostly doesn’t know about CAA. Yes it’s an act now and not a bill anymore.