Raj Mehta's comedy entertainer Good Newwz which is scheduled to release on December 27.

Akshay Kumar, who is gearing up for the release of his next film 'Good Newwz', shared a video with co-actor Diljit Dosanjh as a tribute to all the mothers in the World. The two actors were seen experiencing the labour pain that women go through. Akshay Kumar begins by saying, "The first thing one thinks when they hear the word 'Good Newwz' is 'Labour Pain'." Akshay Kumar and Diljit Dosanjh sit through the electric stimulations sent by the contracting machine to experience the pain women go through during labour. 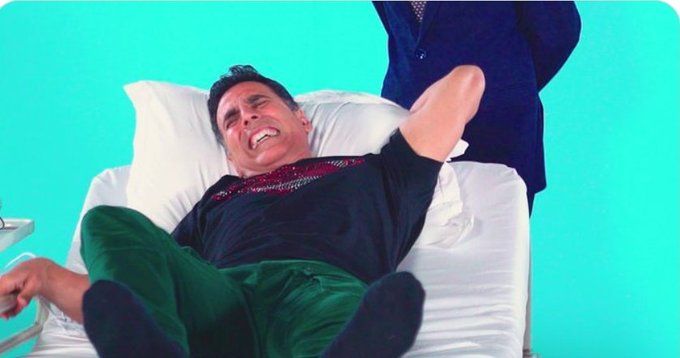 As the video progresses, the doctor increases the speed and Akshay screams with pain while Diljit Dosanjh was seen stamping his feet in pain. Akshay wrote on his Twitter handle: "A small step to understand what mothers go through by @diljitdosanjh & me. Dil se - RESPECT to all the mummies out there, delivering #GoodNewwz is harder than anyone can imagine!" [sic]

Akshay-Kareena, Kiara-Diljit are beaming with joy as they begin 'Good Newwz' promotions

Sir This Video Is Really So Amazing

Hats Off To You Both

It's the hardest thing that a women's does ...so from me to them always a "A Respect" 🤩❣️🙏

Good Newwz is a family-based drama. It is a laugh riot, revolving around the unique social issue of surrogacy. The film is produced under the banner of Karan Johar’s Dharma Productions, and Cape Of Good Films. It is directed by debutant director, Raj Mehta. Akshay Kumar and Kareena Kapoor will be seen sharing screen space after their decade-old movie, Kambakkht Ishq. However, Diljit and Kiara are working together for the first time. The movie was expected to release in September 2019 but got postponed. Good Newwz will now hit the silver screens on December 27, 2019