Janhvi Kapoor can be seen enjoying her cheat meal with sister Khushi Kapoor on her latest Instagram story. She will be seen in the film Dostana 2 very soon.

It is not a hidden fact that Bollywood actor Janhvi Kapoor is a family-oriented person and often shares some adorable pictures with her father Boney Kapoor and sister Khushi Kapoor on her social media handle. Recently, Janhvi took to her Instagram story to share a super cute boomerang video of herself and her sister Khushi as they can be seen chilling together. In the story, one can see the Dhadak actor enjoying her cheat meal consisting of French fries with some dip. Janhvi shared an endearing video of Khushi and captioned it by saying, 'Too much Khushi.' She also shared a glimpse of her cheat meal and captioned it by saying, 'Life feels Complete.' Check out the post here. 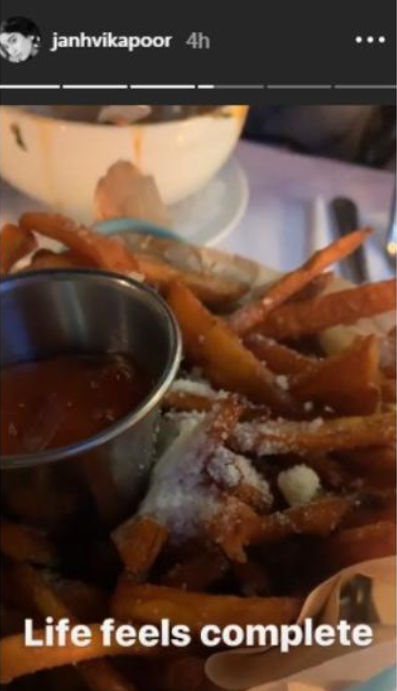 One of her Instagram stories also sees Janhvi relishing her meal to her heart's content. It can be assumed by their warm attires and the Christmas decorations on the backdrop that the siblings are in New York. Janhvi's love for her family is also evident by her statements during her various public appearances. The actor revealed in an interview during the MAMI Movie Mela about her mother. She told that her mother always gave her the advice to be a good person from within. She added that her mother, the late actor Sridevi always said that whatever you carry in your heart and think will eventually reflect on your face.

Janhvi will be seen in the film Dostana 2