Kabhi Khushi Kabhie Gham is one of the most loved family drama films. As it completes 18 years today, check out some of the most hilarious memes on it

Kabhi Khushi Kabhie Gham is one of the most iconic films in the industry. The movie stars Amitabh Bachchan, Jaya Bachchan, Shah Rukh Khan, Kajol, Hrithik Roshan and Kareena Kapoor Khan, with Rani Mukerji in a special appearance. The movie is a family drama film that won many hearts. Released on December 14, 2001, the film has completed 18 years today. Check out some of the hilarious memes made on it.

The scene where big Pooja is doing is one of the most popular memes. Rahul arrives from a helicopter and his mother (Jaya Bachchan) gets to know that he is there just because of his presences. There are various memes made on that scene. 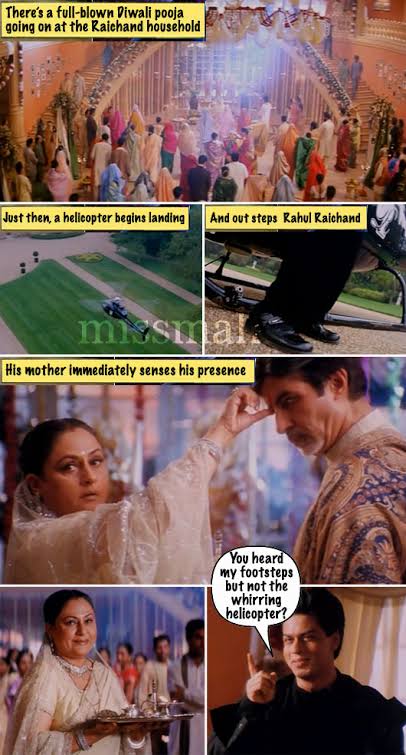 Some Kabhi Khushi Kabhie Gham Memes to summarize the movie up for you 😃 #KKKG #ShahRukhKhan #HrithikRoshan #Kajol #KareenaKapoorKhan pic.twitter.com/WjJ7IgxfAY

The plot of the shows the billionaire family, Raichands’. After marrying a poor woman, rich Rahul is disowned by his father and moves to London to build a new life. Years later, his now grown-up little brother Rohan embarks on a mission to bring Rahul back home and reunite the family again. The film received immense appreciation from the audiences. The movie got a verdict of a blockbuster and performed extremely in India as well as overseas.

PEOPLE HAVE PLEDGED SO FAR
Chitrangda Singh joins Abhishek Bachchan as the leading lady in Bob Biswas
Ranveer Singh has this epic response to his fans as they cheer for him
'Malang': Was kissing Disha Patani awkward? Aditya Roy Kapur answers; reacts on viral pose
Alaya F talks about THIS challenge on her first day at shoot of 'Jawaani Jaaneman'
Kartik Aaryan lifts Sara Ali Khan in his arms in THIS adorable pose during promotions
DO NOT MISS
MAN PUTS MODI MASK IN A RALLY
FORCED CONVERSION IN PAK
SCHOOL SHUT FOR RAHUL GANDHI RALLY
KANGANA CELEBRATES PADMA SHRI WIN
ANURAG THAKUR: 'SHOOT TRAITORS'
LIFE INSURANCE FOR NRI IN INDIA