Kareena Kapoor Khan, Shahid & Other Celebs Who Refrained From Posting On Janta Curfew

Kareena Kapoor Khan, Saif Ali Khan, & Shahid participated in the Janta Curfew on March 22. However, the actors refrained from updating the same on social media

Prominent Bollywood actors participated in the Janta Curfew on March 22. From ringing bells to banging metal utensils, Bollywood celebrities stepped out on to their balconies and on the terraces of their buildings to show gratitude towards the special service providers like the health workers who are working tirelessly to contain the virus. Meanwhile, social media was filled with videos and photos of actors like Amitabh Bachchan, Aishwarya Rai, Deepika Padukone, Ranveer Singh stepping out to laud their efforts. However, among all, there were actors like Kareena Kapoor Khan and Shahid Kapoor who didn't share their support for the Janta Curfew on their social media.

On March 22, at 5:00 in the evening, actor Akshay Kumar took his fans by surprise after he shared his video, banging metal utensils expressing solidarity and empathy towards the medical employees working round the clock to ensure safety in the wake of coronavirus. Thereafter, actors like Amitabh Bachchan, Ranveer Singh, Katrina Kaif, Sonam Kapoor, and others took social media by storm with their videos of supporting the Janta Curfew. However, amid this, actors Kareena Kapoor Khan and Shahid Kapoor stayed away from sharing their solidarity on social media.

Although the two expressed their support through fan QnA, and a social media post respectively, but they didn't post any video at 5:00 PM on Sunday. Besides Shahid and Kareena, actor Vidya Balan and Richa Chadha too stayed away from sharing their support on social media on Janta Curfew on 23 March. Vidya Balan has been aloof from social media for a few days now. 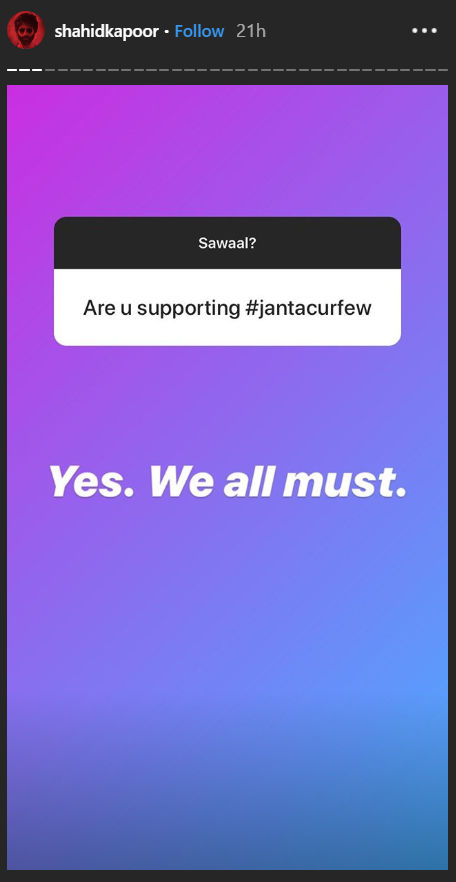