After the demise of veteran actor Rishi Kapoor, his family and friends are keeping him alive in their memories. Being one of them, Bollywood actor Karisma Kapoor is also expressing her grief over the death of Rishi Kapoor. After sharing a few heartwarming posts for late Rishi Kapoor, Karisma Kapoor shared a throwback picture of him on the story session of her social media handle.

Karisma Kapoor shared a picture from the time when Rishi Kapoor with family visited Kashmir in 1988. The picture was originally shared by a fan page on Instagram. Rishi Kapoor is seen posing with an all-smiling face in the photo.

Check out Karisma Kapoor's story below: 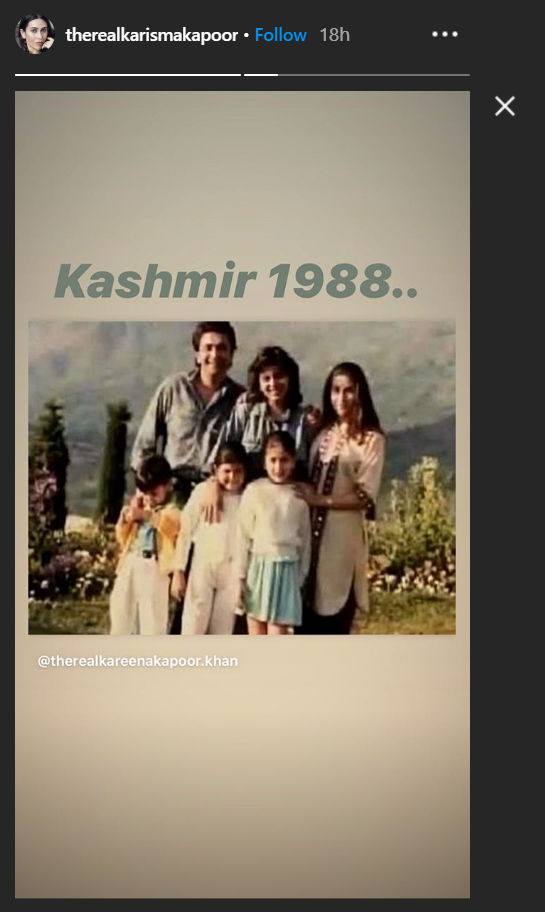 Many recent posts of Karisma Kapoor are dedicated to Rishi Kapoor aka her Chintu uncle. She shared another throwback picture via her Instagram account on Friday. The post captioned, "Family â¤ï¸" comes a day after the death of Rishi Kapoor.

The untimely death of veteran actor Rishi Kapoor has left a void in the entire film industry. The actor passed away at the age of 67 in Mumbai on April 30, 2020, at HN Reliance Hospital. Celebrities across the country have been expressing grief over the loss of the legendary artist. He succumbed to cancer after battling it for two years. He was cremated at the Chandanwadi crematorium in the presence of his immediate family and close friends. The news of his death came a day after critically acclaimed actor and his D-Day co-star Irrfan Khan passed away.