As it is the season of cricket-based movies and biopics in Bollywood, Kartik Aaryan recently expressed his wish to play Virat Kohli if his biopic is ever made. 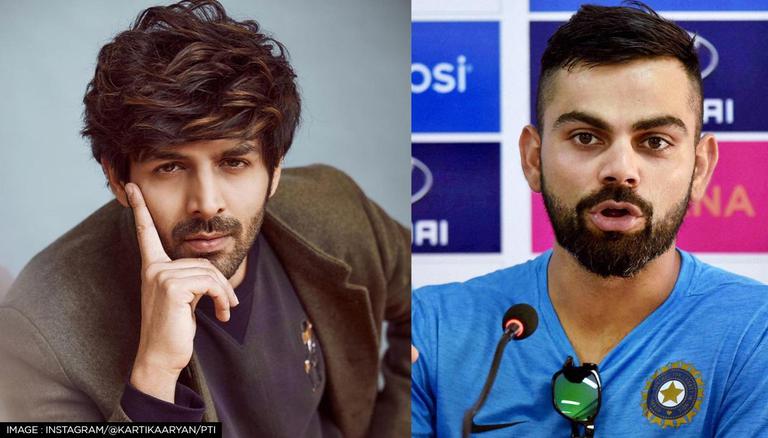 
It is raining cricket biopics and sports drama in Bollywood. While Taapsee Pannu, Anushka Sharma and Shahid Kapoor are gearing up for their cricket-based films, Kartik Aaryan is willing to get in line. If the Pyaar Ka Punchnama star has his way, fans might see him portraying Virat Kohli in the cricketer's biopic.

After breaking his boy next door image with the Netflix hit Dhamaka, Kartik Aaryan is seemingly open to experimenting with different roles. As cricket-based Bollywood films are being made in an abundance, Kartik Aaryan seems to be keen to try his hand in the genre. In a recent interview with Bollywood Hungama, the actor expressed his wish to play the cricket star, Virat Kohli.

During an interaction with the news outlet, Kartik Aaryan answered some questions from fans. He was asked which cricketer's biopic he would like to act in. After giving some thought, Kartik Aaryan came up with "Virat Kohli." The cricketer is the captain of the Indian Men's Cricket Team in Tests. The cricketer is one of the most successful players in the world and is also considered one of the greatest.

Cricket based films in Bollywood

Shahid Kapoor is set to play a cricketer in the upcoming film Jersey. The fiction sports drama is the official Hindi remake of the National Award-winning Telugu film of the same name starring Nani. Taapsee Pannu and Anushka Sharma are also set to bring the stories of women's cricket legends Mithali Raj and Jhulan Goswami respectively.

Meanwhile, Kartik Aaryan has several projects in his kitty. The actor is currently shooting for his upcoming film Shehzada with his Luka Chuppi co-star Kriti Sanon. He also has Bhool Bhulaiyaa 2, Freddy, and Captain India in the pipeline.

READ | Kartik Aaryan meets fans outside his flat screaming his name, says 'This is everything'

WE RECOMMEND
Teenage Virat Kohli's image with Rahul Dravid is going viral; See pic
Kartik Aaryan meets fans outside his flat screaming his name, says 'This is everything'
Virat Kohli missing matches due to injury is too rare, here are 4 times when he sat out
Rahul Dravid heaps praise on Virat Kohli for being phenomenal 'despite noise around him'
Mitchell Starc averages higher than Virat Kohli since 2019; 'rubbish comparison', say fans
Listen to the latest songs, only on JioSaavn.com