Katrina Kaif has evidently been garnering a lot of praise for the launch of her new beauty brand. The actor has partnered with well-known sports apparel brand and has been posting many workout videos on her Instagram. Though Katrina made her debut on Instagram just back in 2017, she has gained a massive following of over 29 million followers. The actor, through her Instagram stories, has given a sneak peek of her workout routine. Check it out.

Also read: Katrina Kaif: The 'Bharat' Actor All Set To Propel A New Change In The Film Industry 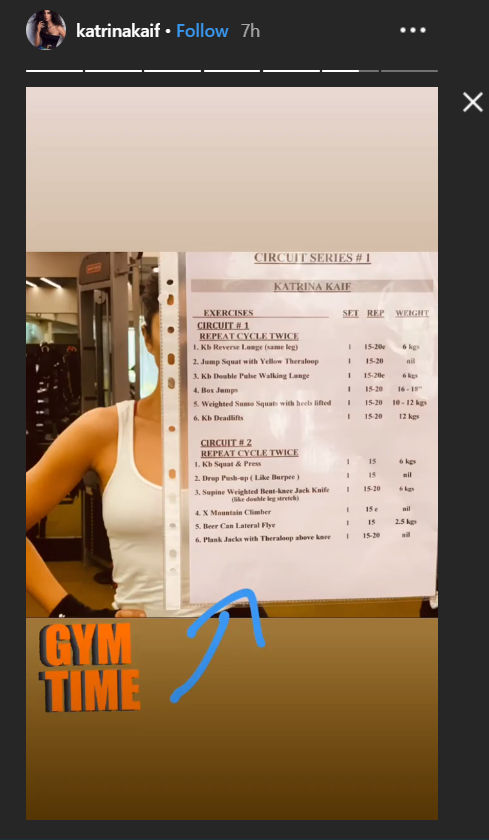 Also read: Katrina Kaif's Tips On How She Keeps Herself Fit And Healthy

Katrina Kaif is considered to be one of the fittest actors working in the Hindi film industry.  As per the routine posted by Katrina herself, the actor has to complete two circuit series of exercises in a workout. The sheet shared by her includes everything like the name, repetitions, weights and all specifications. In the first circuit, Katrina does jump squats, walking lunges, box jumps, and deadlifts. The second circuit includes Squats and press, drop push-ups, plank jacks and mountain climber.

"Ok so maybe mayweather isn’t quite shaking in his boots ...but I’m getting there ... 🥊 💪🏼 😊something special coming soonnnnnnnn 🌟🌟"

Katrina Kaif will be next seen alongside Akshay Kumar in Sorryavanshi. The film will be a cop-action drama film which will be based in Rohit Shetty's ongoing cop universe of films. Except for Akshay Kumar, Ajay Devgn, and Ranveer Singh will also be seen reprising the roles of Singham and Simmba respectively. Sooryavanshi is all set to release on March 27, 2020.

Also read: Katrina Kaif: When The Actor Amped Up The Fashion Quotient In Traditional Sarees

PEOPLE HAVE PLEDGED SO FAR
Katrina Kaif: When the actor amped up the fashion quotient in traditional sarees
Katrina Kaif: The 'Bharat' actor all set to propel a new change in the film industry
Katrina Kaif's tips on how she keeps herself fit and healthy
Katrina Kaif on shooting her first TVC for her brand 'Kay Beauty'
Katrina Kaif impressed by the trailer of Good Newwz, calls it 'outstanding'
Know all about 'Shubh Mangal Zyada Saavdhan' fame actor Jitendra Kumar's career graph
Pankaj Tripathi calls his role in ‘Angrezi Medium’ a "Guru Dakshina" to Irrfan
Disha Patani and her crew chant "Radhe Radhe" in this fun BTS video
DO NOT MISS
DELHI VIOLENCE TIMELINE
'DELHI VIOLENCE AN INTEL FAILURE'
IT MIN MEETS MICROSOFT CEO
AADITYA DEMANDS APOLOGY
INSPIRED OR COPIED?
CAT'S REACTION AMUSES TWITTER