Kriti Sanon is one of the popular actors in Bollywood. She recently shared a post on her Instagram where she talked about domestic violence. Read more to know.

Kriti Sanon is one of the popular names in Bollywood. She has worked in numerous films throughout her career. The actor is quite active on social media during her quarantine and she recently posted an image on social media that talked about domestic violence. She mentioned an NGO name SNEHA that has been fighting against domestic violence for 20 years. Take a look at some more details about Kriti Sanon's post.

Kriti Sanon posted a black and white photo of herself that had 'I am Lalita' written on it. She also stated that because of the COVID-19 lockdown, there has been an increase in domestic violence. She also tagged SNEHA MUMBAI and Malishka in the post. Kriti Sanon also wrote that the names of the women have been changed to protect their privacy. Kriti Sanon thanked Malishka who nominated her for fighting against domestic violence. In fact, RJ Malishka also commented on the post and thanked Kriti for spreading the word.

ALSO READ | Kriti Sanon Reveals She Forced Herself To Eat During The Preps Of 'Mimi'; Know Why

Moreover, RJ Malishka mentioned that she watched Kriti Sanon reciting the poem that she wrote in her 11th standard. The poem was about Kriti Sanon's house helper who suffered from domestic violence. The actor expressed how she felt about the situation and wrote a poem based on that a few days back. Malishka also mentioned that as soon as she saw Kriti Sanon's post, she knew that she was the right voice to spread the word. Malishka also stated that she hopes SNEHA finds the funds that they need to fight and help the sufferers. 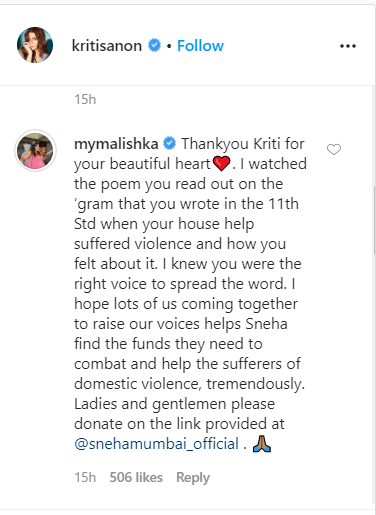 This is the poem that RJ Malishka mentioned in Kriti Sanon's recent post. Kriti Sanon mentioned in the caption of the post that there are about 700 domestic violence cases in Punjab that are registered. She also talked about cases that are not reported. The post gained over 1.8 million views and Kriti's heartfelt poem touched the hearts of fans. Kriti Sanon's fans also supported her by commenting on the post and stated how she is doing the right thing by spreading the word.

ALSO READ | Bhumi Pednekar Or Kriti Sanon: Whose Chemistry With Kartik Entertained The Audience Most?

On the work front, Kriti Sanon recently celebrated the first anniversary of Luka Chuppi. She will be seen in the upcoming film Mimi that is directed by Laxman Utekar. She has wrapped up the shooting of the film. Mimi also stars Pankaj Tripathi and is scheduled to release in July 2020.