Kriti Sanon shares a heartfelt social media post to an adorable video as she wishes sister Nupur on her birthday. Check out the post and know more here.

Panipat actor Kriti Sanon was recently seen vacationing in Switzerland with her sister Nupur. Nupur Sanon celebrated her birthday on December 15, and Kriti Sanon wished her little sister in the most adorable way possible. Kriti shared a heartfelt message for her sister on her social media account and also shared an adorable video of the two. The video, made by a fan page had pictures of the two from their childhood, as well as from a few recent outings.

Check out the video

Nupur Sanon was recently seen opposite Akshay Kumar in the music video Filhall. Kriti Sanon also included the name of the song in her birthday post. She wrote, “I wish you all the happiness in the world. #Filhall enjoy this journey. may you get everything you’ve been praying for.” Nupur and Kriti Sanon went to Switzerland ahead of Nupur’s birthday to have some ‘sister time’ and were seen having a great time in the chilly weather.

ALSO READ: Kriti Sanon Says That Nupur Could Not Get A Better Co-star Than Akshay Kumar; Here's Why 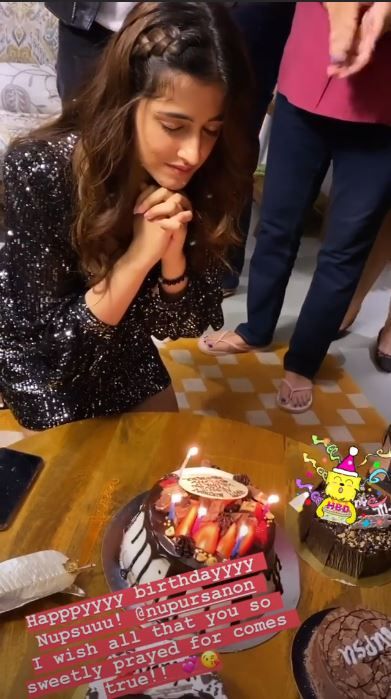 Kriti Sanon also shared a video on her story of Nupur cutting her birthday cake. In the video, Nupur is seen making a birthday wish before cutting the cake. Her friends and family are heard singing the birthday song in the background. Nupur Sanon looked adorable in a black shimmering outfit as she cut her birthday cake. The bond that the two sisters scare is clearly visible in the pictures.

ALSO READ: Kriti Sanon And Nupur Sanon: A Look At Their Diwali 2019 Outfit