Malaika Arora had a sweet birthday message for Anshula as she turned 29. Arjun Kapoor also reminisced his first memory of his sister, when she was born.

Arjun Kapoor’s sister Anshula turned 29 in grand style as she rang in her birthday with her family. Apart from her brother, her half-sisters Janhvi Kapoor and Khushi Kapoor and their father Boney Kapoor ensured that there was something special as the clock ticked midnight. The pictures and videos of Anshula cutting the cake and celebrating had gone viral.

Another important member associated with the family, Arjun’s rumoured girlfriend Malaika Arora, was not spotted at the celebrations.  However, Malaika conveyed her wishes to Anshula with a lovely message for her birthday. Sharing a cute snap of the star kid enjoying a moment with a puppy, she sent across her ‘love and hugs.’ 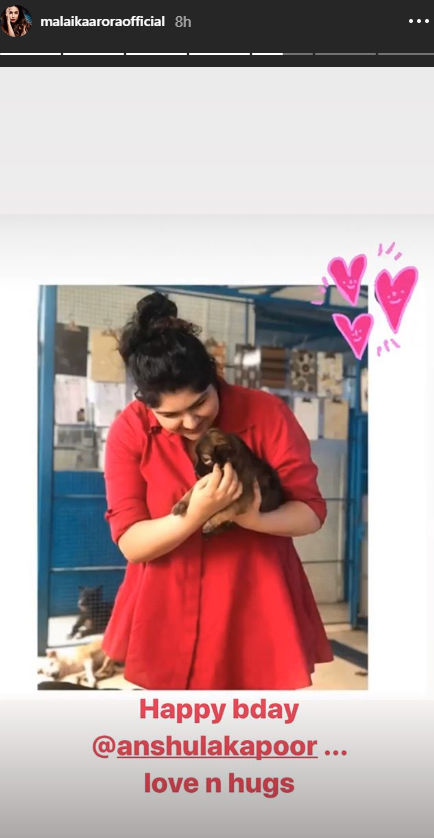 Anshula had earlier stated that discussing with her brother about Malaika was something ‘awkward’ for her. She had then cited their six-year age difference and him being a ‘parental figure’ to not feel comfortable about the discussions.

While Malaika's message was short and sweet, Arjun had an extremely emotional wish for his younger sister. The Ishaqzaade actor shared his first memory of Anshula, holding her in his arms for the first time. Arjun is seen looking delightedly as the nurse placed Anshula into his arms.

He captioned the post, Taking care of each other since 29th December 1990 !!! I got your back & you got mine.Happy Birthday @anshulakapoor have a @fankindofficial kinda year !!! Loved you from the first time I held you...” (sic)

READ:Malaika Arora's Stunning Looks That Will Inspire Your Wedding Wardrobe

PEOPLE HAVE PLEDGED SO FAR
Priyanka Chopra rocks casual & comfy look at the airport as she arrives in India; see pics
From cutting red meat & losing weight, Radhika Madan turns vegan for 'Angrezi Medium'
Hrithik Roshan says 'proud of you mother' as she leads family's Mahashivratri celebrations
Kailash Kher has a special request for Donald Trump during India visit, here's what it is
Ira Khan's out-of-the-box poses in these pictures will make you want to copy her!
DO NOT MISS
AZAD: 'WILL PAY FOR EVERY CRIME'
YOGI, RUPANI SNUBBED AFTER KEJRIWAL
CONGRESS QUESTIONS SENA ON CAA-NPR
SISTER LUCY LAUDS VICTIM'S COURAGE
HRITHIK & FAMILY'S MAHASHIVRATRI
PM MODI ON GENDER JUSTICE