Arjun Kapoor recently conducted a live session on his social media. His girlfriend, Malaika Arora was also a spectator, who had some interesting comments.

Arjun Kapoor and his girlfriend Malaika Arora are among the most talked-about couples in Bollywood today. Their pictures on social media with each other never fail to give fans #CoupleGoals. They have also been spotted hand-in-hand on many occasions and fans cannot get enough of the couple.

Arjun Kapoor recently conducted a live session on his social media handle with his fans. However, his girlfriend, Malaika Arora made a special appearance as the actor was talking with his fans. She even passed witty comments when Arjun explained what his day during quarantine looks like.

Arjun Kapoor is currently quarantining inside his Mumbai house with his sister Anshula Kapoor. He revealed during the live session that he usually wakes up at around 9 am. He even added that like most of the people, even he lazes around the bed for an hour before getting up. Arjun Kapoor also mentioned how he usually skips breakfast and tries to work out before lunch.

ALSO READ | What Should Arjun Kapoor 'Stop Doing'? Malaika Arora Will Agree To This, He Says 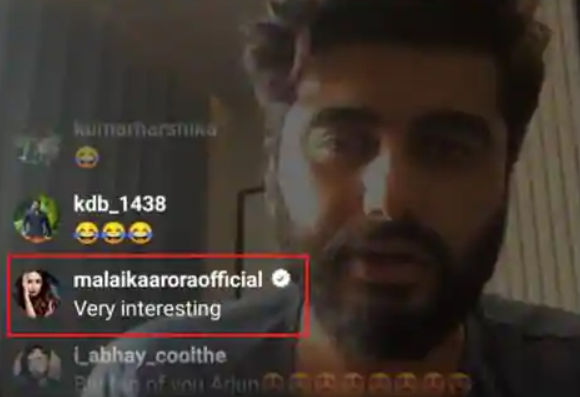 Arjun Kapoor and Malaika Arora have been dating each other for quite some time now. There have also been speculations about their wedding, which both of them have denied. Arjun Kapoor even went on to say that there are no such plans at the moment. However, he said that whenever he plans to do get married, he will let everyone know.

PEOPLE HAVE PLEDGED SO FAR
LATEST NEWS
View all
2 hours ago
From a salute to Sonu to 'Boycott China'; Here's Entertainment news recap of the day
3 hours ago
Varun Dhawan celebrates niece Niyara Dhawan’s birthday amid lockdown
1 hour ago
Tapsee Pannu mourns grandmother's death with heartfelt post, says she 'will stay forever'
2 hours ago
'Because I'm just a human who's allowed to...': Zaira Wasim returns to Twitter, Instagram
3 hours ago
Arshad Warsi joins Sonam Wangchuk's initiative, says, 'going to stop everything Chinese'