Actress Mallika Sherawat was spotted seeking blessings at Dakshineswar Kali Temple on January 29 morning and begin shooting for her next project.

Actress Mallika Sherawat was spotted seeking blessings at Dakshineswar Kali Temple on January 29 morning. The actress is in Kolkata for a shoot that also includes Esha Gupta and Goutam Rode. Esha, who is already in town, is currently busy shooting in north Kolkata. The actress took to her Instagram story and shared a picture from her visit to the temple ghat where she can be seen seeking blessings for her new project while joining hands. She captioned the picture and wrote, “Blessings from Kaali maa.”

Clad in traditional attire, the actress looked stunning in a white suit as she greets the goddess with folded arms while standing in the river. The actress even performed the puja before leaving the temple. The actress resumed the shooting of the next after she spent a vacay in Kerala. The actor posted the first picture of herself on December 25 and revealed that she is enjoying herself being far away from the hustle and bustle of the city. She added that she is out there spending a quiet Christmas at a wellness resort in Kerala. In the pictures, she can be seen sitting comfortably on a chair while drinking her beverage from a coconut. The other blissful pictures of the actress showed her spending a good amount in the land of backwaters. 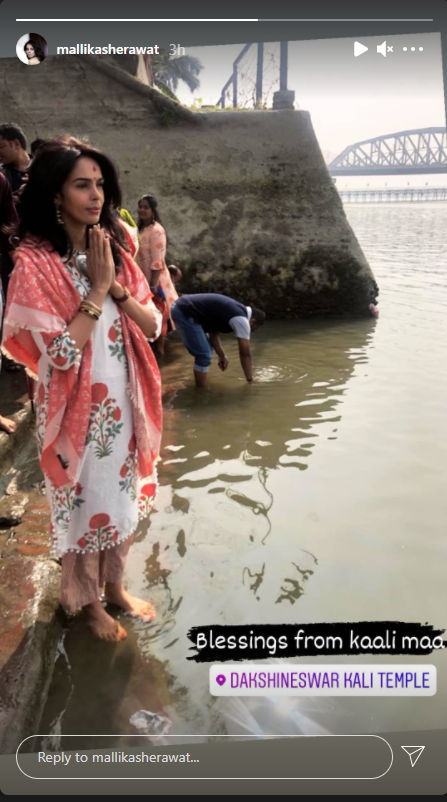 Meanwhile, Mallika Sherawat, whose real name is said to be Reema Lamba, made her big-screen debut with 2002's Jeena Sirf Merre Liye, a feature presentation that very much went under the radar at the time of its release. Sherawat became a well-known name after featuring in the 2004 film, Murder. The Mahesh Bhatt directorial, which spawned a three-film long franchise, had Emraan Hashmi, who was also a debutant at the time, essaying one of its lead characters. In the years to come, Sherawat would go on to play pivotal characters in films like Welcome, Pyaar Ke Side Effects, Double Dhamaal, and the 2010 film, Hissss, to name a few. Her most recent cinematic outing was 2019's Boo: Sabki Phategi.

Read: As Mallika Sherawat Visited Kerala, Here Are Some Of The Most Stunning Pics From Her Trip