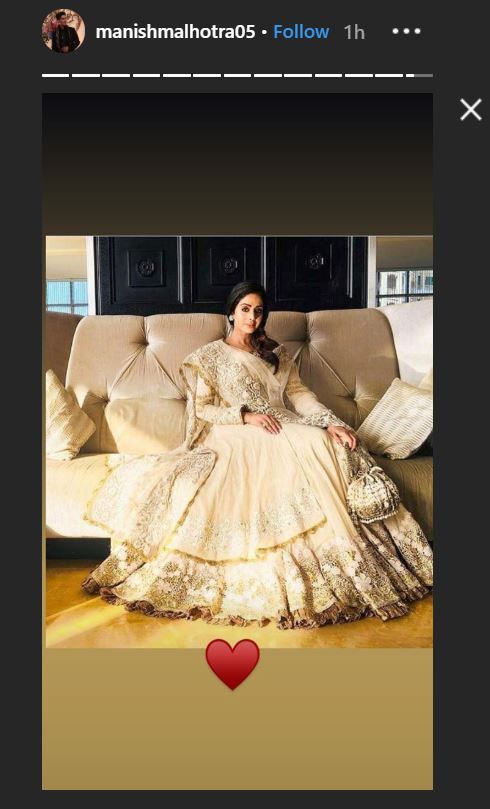 In the picture posted by the ace designer on his Instagram story, Sridevi is seen wearing a beautiful Anarkali dress designed by Manish Malhotra himself. In a previous post, Manish Malhotra had narrated the story of his interaction with Sridevi. He stated that ‘Sridevi and I first met in 1990 when she was already a superstar and I was beginning my career. Working with an icon I always called her “Ma’am” and that was a turning point in my career, as it was the beginning of many associations and a longstanding friendship beyond work.’

After the news of her demise broke, Manish Malhotra had posted a heartfelt message on his social media. He wrote, ‘A gem lost too soon, a star that will never fade. A lively spirit who touched the hearts of millions and forever served as an inspiration to many. You will be cherished and deeply missed.’ Manish Malhotra had also posted many pictures from Sridevi's funeral on his Instagram account.

It has been reported that Sridevi passed away due to accidental drowning while she was in Dubai for a family function. While she was accompanied by her husband Boney Kapoor and younger daughter Khushi to the event. Her elder daughter Janhvi Kapoor had stayed back in Mumbai due to work commitments. Sridevi’s sudden demise had taken the industry by a shock as many stated that the grief of her loss was unexplainable.

ALSO READ: 'I Miss You': Manish Malhotra Remembers Sridevi With A Heartfelt Post On Her First Death Anniversary