Deepika Padukone's mere presence at the Jawaharlal Nehru University (JNU) set in motion a chain of reactions from both sides of the political fence, and also somewhat divided Bollywood. Amid the imminent release of her prestige project, Chhapaak, Padukone had attended the Left-dominated Students' Union protest joining Kanhaiya Kumar (though the CPI(M)leader and former JNUSU president later claimed that he did not see her there as he was busy sloganeering). Now, following Chhapaak's release and the tepid response it has received at the box office, its director has made a claim that is not entirely believable.

After the flim slowed to a crawl on the critical Day 4 following its release - the Monday after the release when the long tail of a film's lifecycle generally begins - the Chhapaak director, Meghna Gulzar, in an interview with the news agency PTI described Padukone's visit as a 'personal choice'.

Asserting that one should know how to separate the 'personal' from 'professional', the filmmaker urged audiences to 'divert the lens' and look at the reason for making a film based on the life of an acid attack survivor Laxmi Agarwal.

Upon carefully analyzing the filmmaker's statement over the incident and the events that followed Deepika's JNU visit, however, one can say that the Raazi helmer's sparingly worded distinction between 'professional' and 'personal' doesn't quite hold.

After Padukone's seven-minute visit to JNU, several pictures crediting 'SPICE PR' surfaced that in-turn raised umpteen questions over the intent of the drop-in. Even as industry sources claimed that her attendance at the varsity was to promote her film, Chhapaak, that was due release at that time, the images of the visit being circulated by the PR agency - though not on its own handles - gave it away. Padukone's PR managers were also spotted next to her at the JNU campus.

Deepika Padukone attended the Left-dominated Students' Union protest for just seven minutes, but very soon, what appeared to be a mass social media campaign containing a handful of pictures emerged. A hashtag reading, #ISupportDeepika started trending just minutes after the actress' visit. Netizens spotted that the tweets under the #ISupportDeepika were found as identically similar and allegedly hinted at the PR machinery ahead of her film's release. 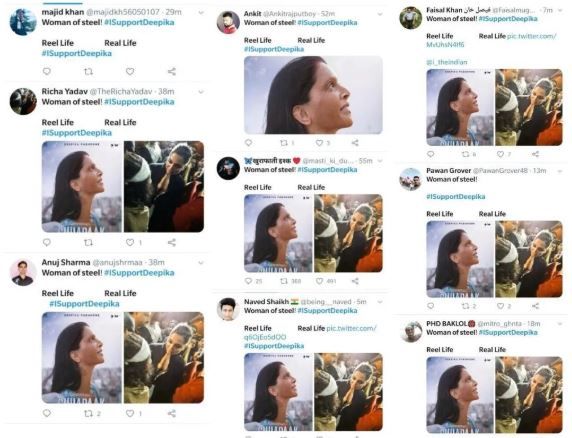 As pointed out by Smriti Irani, Deepika Padukone should have known what she was getting into, and it is impossible to imagine that she would not have known that her visit to the tinderbox that JNU had become by that time would not go unnoticed. Following that, numerous state governments made the film tax-free, while there was also significant backlash at the other end. There is no doubt that the JNU gave Chhapaak a higher profile than it would have otherwise had.

READ: Deepika Padukone Should Understand India, Needs An Advisor Like Me: Baba Ramdev