Mouni Roy's latest social media photoshoot made dancer Lauren Gottlieb wish to swap identities with the actor in her next life. Read further to know why.

Mouni Roy and Lauren Gottlieb are also close friends in real life and also follow each other on social media. The two have occasionally been spotted together, ever since Lauren Gottlieb made her debut in Bollywood in ABCD: Any Body Can Dance. Recently Lauren revealed that she wanted to swap identities with Mouni Roy in the next life.

Above are the pictures from Mouni Roy's latest photoshoot that were shared on social media by the actor. In the pictures, Mouni donned an elaborate and beautiful gown, that was embroidered with a stylish leopard skin pattern. It was in the comments section of one of these photos where Lauren Gottlieb revealed her desire to swap identities with Mouni Roy in the next life. Just like many of Mouni Roy's fans, Lauren was enamoured by the actor's natural beauty and gorgeous dress. Which was why she wished for her next life to be just like Mouni's. 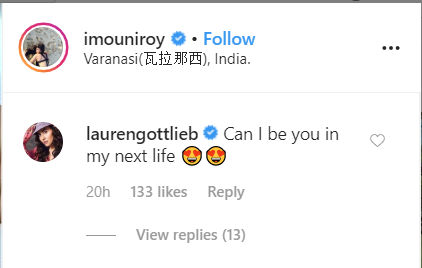 On the work front, Mouni Roy is set to feature in two upcoming films in 2020, including Brahmastra and Mogul. Brahmastra is directed by Ayan Mukerji and will star Amitabh Bachchan, Ranbir Kapoor and Alia Bhatt in the leading roles, with Mouni playing a supporting role. Mouni Roy will also play a prominent role in Mogul, directed by Subhash Kapoor, which will star Aamir Khan and Gulshan Grover as the leads.