Nushrat Bharucha turned a year older on Sunday, May 17. The internet was blazing as fans and celebs outpoured lovely wishes for the actor. On her special day, Nushrat hosted a #AskNushrat session on Twitter. Amid the flooding questions, one fan questioned the star about her special moment with Ayushmann Khurrana. Here's what Nusrat Bharucha revealed.

Nushrat says Ayushmann is her dose of laughter

On Sunday, one of Nushrat Bharucha's fans questioned the Pyaar Ka Punchnama actor about her special moment with Ayushmann Khurrana. Bharucha replied saying, "All the moments when he cracks me up with his jokes! He's my dose of laughter & I love those moments." Fans in huge numbers gushed to talk about the duo's chemistry in Dream Girl. Take a look.

All the moments when he cracks me up with his jokes! He's my dose of laughter & I love those moments!#AskNushrat https://t.co/Cig8Tr6jON

Moreover, during the online interaction with her fans, Nushrat also hinted that she would like to settle down soon. When a user asked, "What is the biggest thing yet to be achieved in your life?" she responded to the tweet by saying, "To find that perfect someone to spend the rest of my life with, who I can build a family with and call my own." One user also ended up asking Nushrat's hand for marriage. In response, the actor wrote, "I'm glad my mother is not on this Twitter chat."

To find that perfect someone to spend the rest of my life with, who I can build a family with & call my own.#AskNushrat https://t.co/LfyiyOD4od 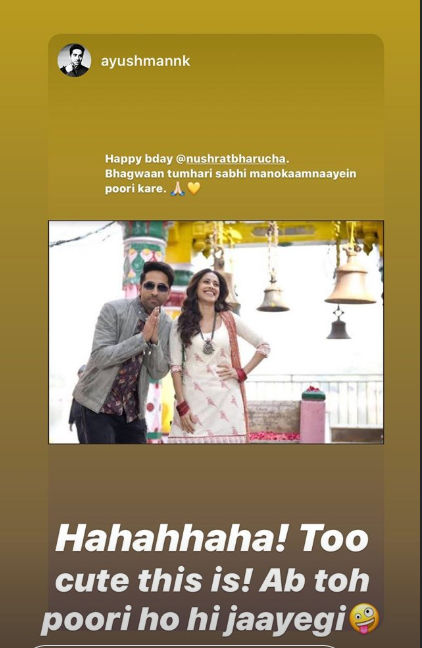 Nushrat Bharucha celebrated her 35th birthday at home with her family members. Nushrat uploaded a video on social media where she could be seen dancing along with her mother just a few hours ahead of her birthday. Nushrat captioned the video as "House party with mommy."

What's next for Nushrat Bharucha?

Nushrat Bharucha will be seen in the upcoming film, Hurdang, which also stars Sunny Kaushal, Vicky Kaushal's brother. Sunny made his Bollywood debut with the movie Gold and now will be playing the lead opposite Nushrat. According to reports, the film will be about a social cause and the story is set in Allahabad. Helmed by Nikhil Nagesh Bhatt, Hurdang will also star Gully Boy actor Vijay Varma in a lead role.

Moreover, Nushrat Bharucha and Rajkummar Rao's upcoming starrer Chhalaang is reportedly a black-comedy that also has some elements of romance. Chhalaang is based in a remote small town in Uttar Pradesh. While Rajkummar will be seen playing the role of a PT teacher named Montu in a semi-government school in Haryana, Nushrat, on the other hand, will be seen playing his love interest in the film.