Pooja Hegde Reveals Her Favorite Film In Instagram AMA, Calls It "so Inspiring"

Pooja Hegde is a popular model and actor. The actor is popular for inspiring her fans and followers with her beauty. Read on to know about her favourite film.

Pooja Hegde is a popular model and actor. The former beauty pageant contestant was crowned as the second runner-up at the Miss Universe India in 2010. The 29-year-old actor is popular for inspiring her fans and followers with her beauty and fashion sense. Often, she posts aesthetic pictures and influences her 9 million followers on Instagram. The Mohenjo Daro actor recently answered a few questions asked by her fans on Instagram’s AMA feature. The actor revealed her favourite film. Let’s take a look at Pooja Hegde's Instagram. 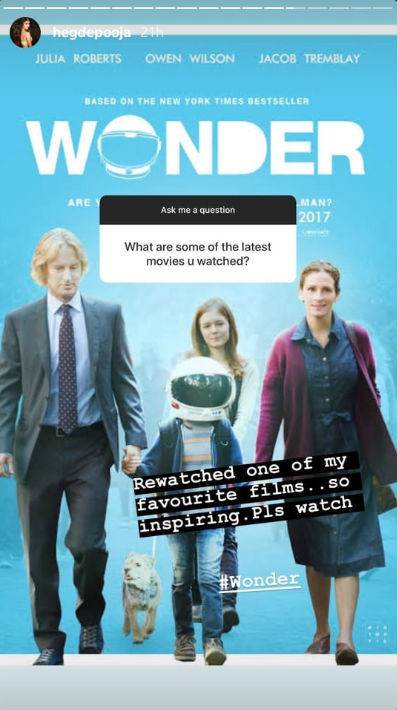 As shown in the above image, Pooja Hegde shared this poster of her favourite movie when asked by fans on her Instagram. She revealed that her favourite movie is 2017's Wonder. The film told the story of a boy with facial differences. The movie stars popular actors Julia Roberts and Owen Wilson in lead roles.

Hegde made her acting debut in Mysskin's Tamil superhero film Mugamoodi in 2012. She then rose to fame after she awed the audience with her sharp looks and incredible acting skills. Pooja Hegde recently appeared in the Bollywood film Housefull 4 alongside Akshay Kumar, Riteish Deshmukh, Bobby Deol, Urvashi Rautela, and Kriti Kharbanda.

Pooja Hegde has now appeared in several popular films. She was also widely praised for serving her best looks in the movie Mohenjo Daro. She also appeared in 2020's hit film Ala Vaikunthapurramloo. She starred alongside popular actor Allu Arjun in the film. The Telugu action-drama is helmed by Trivikram Srinivas and was huge at the box office. However, her work in South-Indian films is exceptional.

Also read: Pooja Hegde: All About Her Journey From Miss Universe India To A Career In Films

Pooja Hegde has worked in several South-Indian films. Pooja Hegde's movies that are widely popular include not just Bollywood films like Mohenjo Daro and Housefull 4 but also South Indian films like Mugamoodi, Gaddalakonda Ganesh and more. She will next be seen in Bhaskar's Most Eligible Bachelor.