Pulkit Samrat revealed that he believes in spicing up leg days as they give a unique rush. Have a look at the post on the actor's social media with all details.

Bollywood actor Pulkit Samrat recently took to social media to share a workout picture of himself from the gym. In the picture, he is seen pulling off a leg day with heavyweights and strong dedication as he wishes to achieve his fitness goals. His trainer can also be helping and motivating him while Pulkit completes the set. In the caption for the post, Pulkit Samrat has mentioned that he loves a productive leg day due to the adrenaline rush. His fans have flooded the comments section with compliments while enquiring about his next Bollywood film.

Indian actor Pulkit Samrat recently took to Instagram to share an intense picture of himself from a busy leg day. In the picture, he is seen focusing on his exercise routine which is being pulled off with the help of weight equipment. He is seen maintaining proper form with hands held at an angle, to get the most benefit out of the fitness regimen. Pulkit Samrat is also seen wearing a facemask in the gym to keep himself protected from the COVID 19 virus.

Pulkit Samrat is seen donning a pair of ripped track pants and a simple white tank top which is apt for the gym session. He is also seen wearing a smartwatch and a black contrasting facemask which stands out in his attire.

In the caption for the post, Pulkit Samrat has spoken about leg day and how much he likes them. He has mentioned that exercise must always be made interesting with unconventional styles so that the mind is always interested in the activity. He has also started an initiative to learn more about his fans and their workout styles as they seem to have plenty of ideas. Have a look at the post on Pulkit Samrat's Instagram here.

In the comments section of the post, he has received a lot of compliments for his dedication and hard work. A few people have also added a bunch of emoticons to express their thoughts on the actor’s advice. Have a look at a few comments. 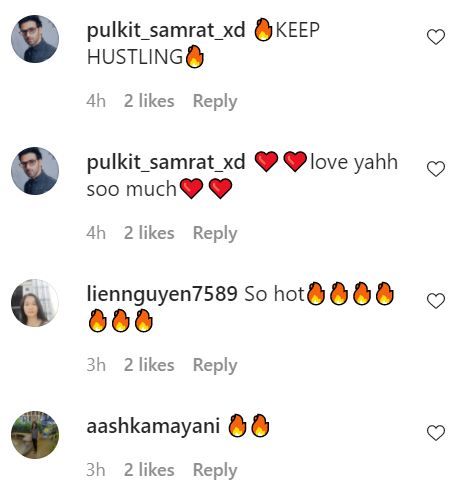 Read Pulkit Samrat Shows How His 'Friday State Of Mind' Looks Like; Flaunts His Quirky Tee

Also read Pulkit Samrat Shares Thoughts On His Workout Regime, Calls It A 'form Of Meditation'