Taking to Twitter, R Madhavan reacted to Hrithik Roshan's first glimpse as Vedha from 'Vikram Vedha'. 'Now that’s a “Vedha” I do want to see' he quipped. 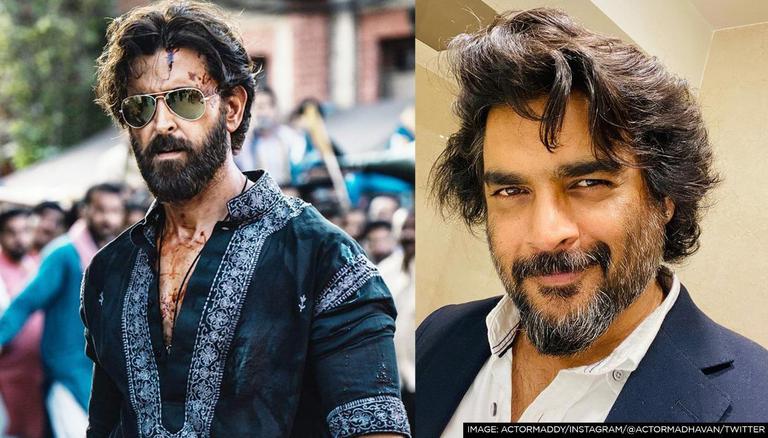 
Hrithik Roshan's first look as Vedha from Vikram Vedha has left fans excited to see the actor's intense avatar alongside Saif Ali Khan. The film comes as the remake of a 2017 Tamil film by the same name which starred R Madhavan and Vijay Sethupathi in lead roles. Among myriad compliments received by Hrithik, the original Vikram, R Madhavan, was left stunned by his first look and called it 'epic'.

Lauding the actor, Madhavan quipped how that's a Vedha he wants to witness on screen. The action-thriller is based on the folktale Vikram aur Betaal, and narrates the story of a police inspector Vikram who ventures out to kill a notorious gangster Vedha.

Taking to his Twitter handle on Monday, January 10, the Decoupled actor shared Hrithik's first look from the film and wrote, "Now that’s a “Vedha” I do want to see…. Wow bro .. this is EPIC. Damnnnnn" and added multiple emoticons. Take a look.

This isn't the first time Madhavan has lauded Hrithik for his role in the film. Last year in October, Madahavn visited the sets of the action thriller and shared how he loves the way makers are mounting the film. He further quipped how the Koi Mil Gaya actor is going to "rule the world" with his performance.

READ | R Madhavan on Saif stepping into his shoes for 'Vikram Vedha': 'He could steal my thunder'

"Totally Blown with what you guys have done in terms of the mounting of this film.. @iHrithik looks like he is going to rule the World .. what an attitude and look, man. Phew .. This one has “historic” & “ legendary” written all over it bro.", he mentioned.

Totally Blown with what you guys have done in terms of the mounting of this film.. @iHrithik looks like he is going to rule the World ❤️❤️🤗🤗🙏🙏.. what an attitude and look man . Phew .. This one one has “historic” & “ legendary” written all over it bro. ❤️❤️ https://t.co/axRZiV248f

Hrithik revealed his Vedha avatar on the occasion of his 48th birthday today. The actor can be seen in a rugged avatar with a bushy hairstyle and beard with blood smeared all over his face and chest. Sharing this picture, Hrithik wrote “वेधा. VEDHA.”

The film is helmed by the original makers of the film, Pushkar-Gayathri, and it is produced by Neeraj Pandey. The remake also features Saif Ali Khan and Radhika Apte in pivotal roles. It is scheduled to release on September 30, 2022, in theatres.

READ | Hrithik Roshan's message to the 'child within' will leave you inspired; watch