Ranveer Singh Pulls Off 'Joe Exotic' From 'Tiger King' In Hilarious Meme; Asks Who Did It?

Recently, Ranveer Singh took to his Instagram handle to share a ‘tiger king’ meme of himself, in which he can be seen as Joe Exotic from Tiger King series

Since the announcement of a complete lockdown was made by the Government of India to control the spread of Coronavirus, Bollywood celebrities like Deepika Padukone and Ranveer Singh have been entertaining their fans with pictures of their 'quarantining' and have also indulged in some fun-filled interactive online sessions. Recently, Ranveer Singh took to his official social media handle to share a Tiger King meme of himself. Read details.

Netflix series Tiger King: Murder, Mayhem, and Madness has been the talk of the town ever since it premiered in March on the streaming giant. Apart from the gripping plot, the series also has had a lot of moments, which have now become the most meme-worthy content on the internet. Recently, Ranveer Singh took to his Instagram handle to share a ‘tiger king’ meme of himself, in which the actor was photoshopped with Joe Exotic. With the meme shared, Ranveer Singh wrote: “who did this?” with a laughter emoticon. Take a look at the meme shared by the actor: 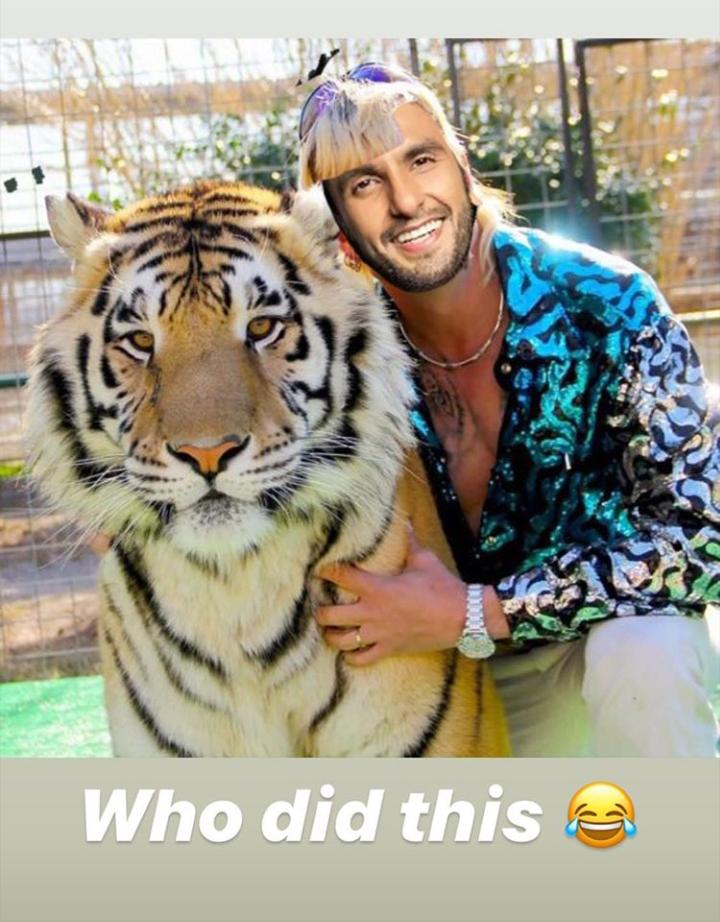 What's next for Ranveer?

Ranveer Singh has many releases lined up in the coming year. Ranveer Singh will be seen along with Kareena Kapoor Khan, Janhvi Kapoor, and Bhumi Pednekar in the multi-starrer period drama, Takht. The actor will also be seen in the upcoming biopic, '83. The movie is based on the life of the cricket legend, Kapil Dev. The film also stars Deepika Padukone in a prominent role. Singh is currently shooting for his next comedy entertainer, Jayeshbhai Jordaar.

83 is not just our film but the entire nation’s film. But the health and safety of the nation always comes first. Stay safe, take care.
We shall be back soon!
.@kabirkhankk @deepikapadukone @Shibasishsarkar #SajidNadiadwala @vishinduri @ipritamofficial @RelianceEnt pic.twitter.com/wS0Anl8BM2