Rishi Kapoor's death: Daughter Riddhima Kapoor, who is driving her way back home, took to her Instagram handle and posted a throwback photo of her father.

Rishi Kapoor passed away on April 30, 2020, due to leukemia. His demise has left his fans, family members and friends heartbroken. The actor was diagnosed with leukemia two years back, in 2018. Several fans and celebrities took to their official social media handle to pay their respects to the legendary actor. His daughter, Riddhima Kapoor was not present during Rishi Kapoor's funeral. She posted on her social media handle that she is driving her way back home to her family. Today, Riddhima Kapoor took to her Instagram handle's story section and posted a photo of her late father. Read on to know more details about what Riddhima Kapoor has to say about her father here:

On May 2, 2020, Riddhima Kapoor took to her official social media handle and posted a photo where fans can see a young Rishi Kapoor with a bright smile. On the photo, his daughter wrote, "Legends live forever" and "miss you". Here is the photo: 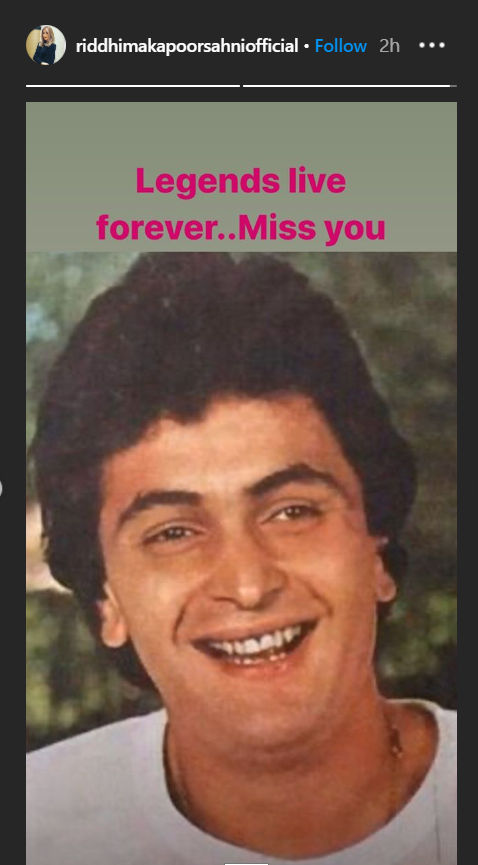 Earlier, when the actor had passed away, Riddhima took to her social media handle and posted a photo with her late father to pay her respects. She stated that she loves him and will always love him no matter what. She mentioned that he was a ''strong warrior''. She further said that she will miss her father every day, and also mentioned that she wanted to be there with him in his final moments to wish him goodbye.

ALSO READ | When Rishi Kapoor Opened Up About His Son, Father And Friends In His Autobiography

PEOPLE HAVE PLEDGED SO FAR
LATEST NEWS
View all
1 hour ago
Will chris as chulbul pandey & scajo as rajjo click if 'dabangg' was remade in hollywood?
2 hours ago
Aamir khan mourns the death of hockey star balbir singh sr
3 hours ago
Amrita singh is singing 'tum aa gaye ho' for saif ali khan in this viral video; see here
3 hours ago
Sussanne khan reflects on 9 years of charcoal, says 'single experiment can prove me wrong'
1 hour ago
When priyanka chopra was accused of abusing a doctor in ugly in-flight argument; read here