Salman Khan's nephew, Ahil Sharma is seen awestruck by Jacqueline Fernandez in a video uploaded by Arpita Khan Sharma. Check out the video and know more

Salman Khan’s nephew, Ahil Sharma is among the most adorable kids in Bollywood. Ahil’s parents, Aayush Sharma and Arpita Khan Sharma along with Salman often post the star kinds pictures on social media. Recently, mother Arpita shared a video in which Ahil appears to be ‘lovestruck’ by Jacqueline Fernandez. Read to know more.

Arpita Khan Sharma has more than 1 million followers on Instagram and has been quite active there. She recently shared a small video on her story. In it, Ahil and Jacqueline Fernandez are seen eating something. Jacqueline says ‘yummy’ in a squeaky voice to Ahil and he looks awestruck. Check out the video. 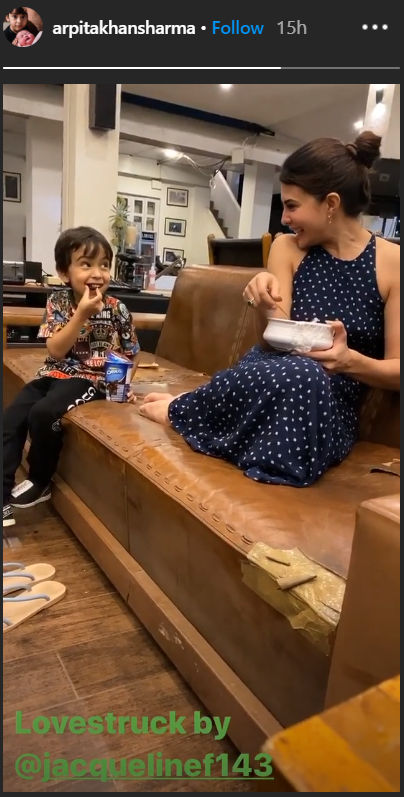 Also Read | Jacqueline Fernandez Wishes Parents Were With Her, Worries For Them During Virus Scare

Arpita Sharma is currently living  with Salman Khan, Aayush Sharma and others at Salman’s farmhouse in Panvel. Earlier, Aayush uploaded a video in which he urged fans to stay at home and use the time to do things what one cannot normally. Jacqueline Fernandez commented ‘where are you?’ on the post and Aayush replied ‘secret location’ with two laughing emojis.

Salman Khan and Jacqueline Fernandez both have been requesting their fans to stay at home and take the necessary measures to fight COVID-19. Salman uploaded several videos on the same.

Also Read | Watch: Salman Khan Says, 'Three Weeks Since I Saw My Father, COVID Has Scared Us All'

Jacqueline Fernandez was recently seen in a music video with Badshah titled Genda Phool. It received good responses and has crossed 120 million views on YouTube. Salman Khan will next be seen in Radhe: You Most Wanted Bhai.

PEOPLE HAVE PLEDGED SO FAR
LATEST NEWS
View all
5 hours ago
Milind Soman recalls running 1500 kms from Delhi to Mumbai in 2012
6 hours ago
Sonu Sood changes profile picture, actor thanks fan for the beautiful sketch; See inside
4 hours ago
Katrina Kaif and Ranveer Singh to team up for Zoya Akhtar's next untitled film
4 hours ago
When Abhishek Bachchan, Aishwarya Rai opened up about their marriage on a chat show
5 hours ago
Alia Bhatt is all smiles with her granny in these throwback pics; Check out