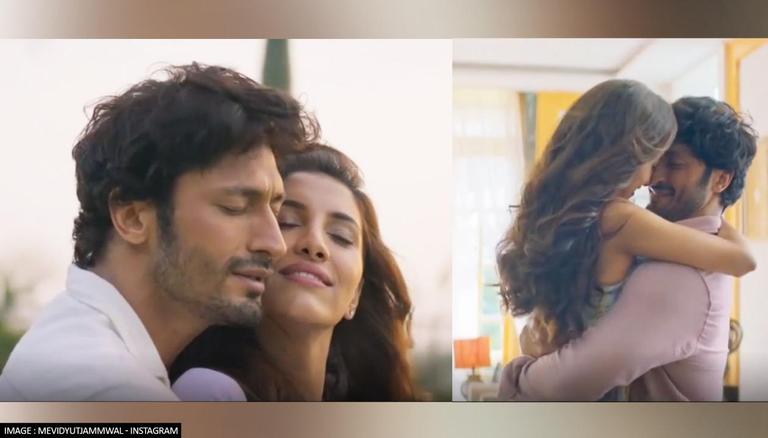 
Ahead of its release tomorrow, makers of Vidyut Jammwal and debutant Rukmini Maitra's upcoming thriller Sanak have released its new sound titled Suna Hai. Crooned by Jubin Nautiyal, the romantic track gives an exciting glimpse of the leading pair's chemistry. The song's lyrics have been penned by Rashmi Virag along with Jeet Gannguli's composition. Helmed by Kanishk Varma, the film centres on Vidyut's character, who turns saviour for his love interest caught in a hostage crisis.

Taking to their respective social media handles on Thursday, October 14, Vidyut and Rukmini uploaded the clip, which showcases their brewing romance in a solitary residence. For the caption, Jammwal wrote," One of my favourite tracks of #Sanak. #SunaHai  song out now." Maitra also unveiled the song with a caption stating," The song you have all been waiting for.. Kyunki, Pyaar Hi toh Zindagi ki Asli". Take a look.

READ | Vidyut Jammwal announces 'Sanak' release date; Here's where and when to watch the new film

Earlier this week, another romantic melody from Sanak titled O Yaara Dil Lagana was released, showcasing the leading duo expressing love for each other in the backdrop of a club. The latest rendition of the song, which was a part of the 90s film Agnisakshi, has been crooned by Stebin Ben and Deeksha Toor.

The film's trailer is packed with Vidyut's signature punches as he wards off the terrorist gang lead by the mastermind Chandan Roy Sanyal. The movie will showcase Vidyut's exceptional MMA skills coming to play in his mission to safeguard the hostages which include his love interest Vanshika (Maitra). Neha Dhupia will be seen helming a cop's role who aids Jammwal's mission with her team.

The movie, which was announced in January this year, marks Vidyut's fifth collaboration with Vipul Shah after coming together for movies like Force and Commando. Meanwhile, Vidyut will be seen in Khuda Haafiz Chapter II Agni Pariksha with Shivaleeka Oberoi. He has also announced his home production, IB71, which is being directed by Sankalp Reddy.

WE RECOMMEND
Vidyut Jammwal announces 'Sanak' release date; Here's where and when to watch the new film
Vidyut Jammwal-starrer 'Sanak' to witness an OTT release; New poster revealed
Vidyut Jammwal on completing 10 years in cinema: 'Living the dream of an average Indian'
'Sanak' trailer out: Vidyut Jammwal turns saviour in a hostage crisis; WATCH
Vidyut Jammwal opens up on his relationship with fiancé Nandita Mahtani
Listen to the latest songs, only on JioSaavn.com