Plagiarism allegations have been a common part of the entertainment industry for years. While movie plots, stories of other kinds of content and music tunes have been involved in these controversies for a long, posters, outfits and even social media posts are being called out in recent years. Diet Sabya, which has been gaining popularity for the second category of ‘copies’, recently called out Sanjay Dutt’s KGF: Chapter 2 look and Bhumi Pednekar’s post on World Nature Conservation Day.

READ: Onir Calls Out Zoya Akhtar's 'Made In Heaven' For 'plagiarising' Scene From 'I Am'

Netizens did not have to rack their brains much in calling out Sanjay Dutt’s much-awaited look from the multi-lingual action film as a copy of Ragnar from Vikings. Not just the hairstyle and facial beard, even the outfit, weapons and the setting of the poster got termed as as ‘ctrl +c, ctrl + v’ job.

Reacting to this meme, Diet Sabya reacted ‘And I Oop’, used to express shock or embarrassment. 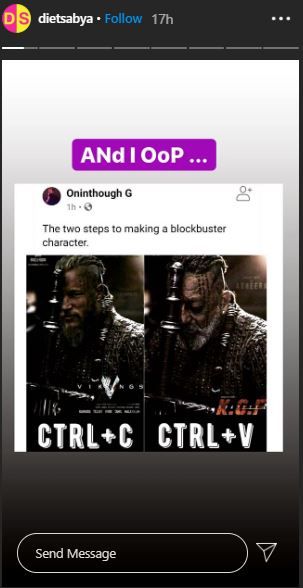 Bhumi Pednekar had posted numerous videos on her Instagram profile, where Taj Hotel, Howrah Bridge and other monuments are seen getting surrounded by flowers and greenery in a graphical manner to send the message of World Nature Conservation Day.

An artist named Saim Ghani had called Bhumi out for plagiarising his idea, calling it ‘mysteriously shocking’ and unfair, and how her team eventually agreed to give him ‘Creative Inspiration’ for his post.

Diet Sabya asked what gave the celebrities the right to ‘steal ideas’ for engagement and only agree for ‘lowkey credit’ when called out. Asking if it was ‘sneaking behaviour’, the handle asked if ‘creative inspo’ was a pass for stealing concepts. 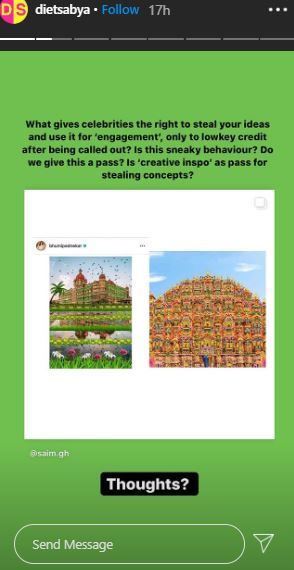 These are not the only ones in recent days. Onir called out Zoya Akhtar for a scene in the web series Made in Heaven. Gulabo Sitabo, Kaduva too faced plagiarism allegations before it was denied by the writers.