Union minister Smriti Irani has revealed, through her recent social media update, what keeps her going on a Monday morning & it has a Sara Ali Khan connection.

Amidst her hectic schedule as a Union Minister Smriti Irani often updates her social media accounts with memories of her personal life. The erstwhile television actor keeps herself up to date with the latest trends on social media and often posts hilarious memes through her Instagram or her Twitter handle.

In her latest Instagram story update, Smriti Irani has posted a sneak peek into her playlist to drive away Monday blues. From her story on Monday morning, the BJP minister had been hooked to the latest song Haan Main Galat from Sara Ali Khan and Kartik Aaryan starrer film Love Aaj Kal directed by Jab We Met fame, Imtiaz Ali. 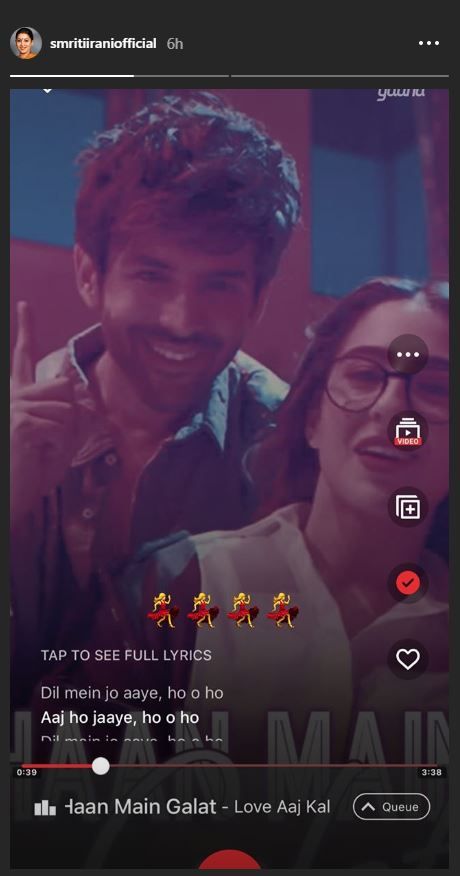 The soundtrack has been a chartbuster since its release earlier last month and is a perfect track to kickstart the week on a Monday morning. Irani is the current Minister for Textiles as well as for Women & Child Development. Prior to a career in politics, she had been a TV soap opera regular who rose to fame with Ekta Kapoor's show Kyunki Saas Bhi Kabhi Bahu Thi.

Recently, Ekta Kapoor's son Ravie turned one and to mark the special day, Union Minister Smriti Irani, who is also a close friend of Ekta Kapoor posted a heartwarming wish on her Instagram profile. Sharing some unseen pictures of the TV producer with her son Ravie, she talked about how she got the toddler his first doctor set and also revealed that his nickname is 'Ravioli'.

Extending wishes and greetings on this special occasion, the BJP leader wrote,'Your nana Nani, mama, and brother adore you. I refuse to respond to the name Ravioli (he is a dish for sure but no way will someone make Ravioli his call sign). You are loved, Ravie Kapoor. Happy Birthday, God bless."