Republic Day is considered as one of the most important days in Indian history and the occasion is known to evoke a feeling of pride among citizens. The day is also marked with grand celebrations across the country and one of the highlights on the occasion were the numerous events marked at Rajpath, attended by the who’s who of the politics fraternity. As Bollywood stars also tuned in to the ceremony, Shahid Kapoor’s wife Mira Rajput Kapoor shared how watching the turn of events made her fill with pride.

Sharing a snap on her Instagram stories of the visuals running on TV, Mira shared with her fans that she was watching the celebrations with the kids, Misha and Zain. Sharing that her ‘heart fills with pride’, he expressed her delight about passing ‘pride & patriotism’ to her children. 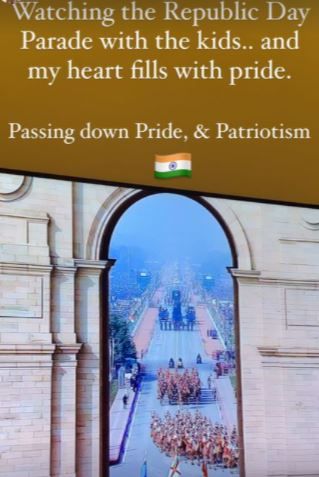 The parade features the unfurling of the National flag and tributes by President Ram Nath Kovind, Prime Minister Narendra Modi at the war memorial, march by the defence forces and events marking cultures of various states.

Many other celebrities of the film industry had similar feelings on Republic Day. One of the others who had got emotional on watching the parade had been veteran actor Satish Shah. He had written that he was watching it with ‘utmost pride’ and ‘moist eyes.’

The other stars also posted messages, wishing their fans, and some of them also attending flag-hoisting events.

Meanwhile, Mira Rajput is currently in the news for her loved-up pictures with Shahid Kapoor from their Goa trip. The latter’s comment on her ‘looking for magic’ post that he could see it in her eyes. was loved by their fans. Shahid Kapoor, meanwhile, will next feature on the big screen in Jersey, the shooting of which he recently completed.