Ekta Kapoor's son Ravie turned one and to mark the special day, Union Minister Smriti Irani, who is also a close friend of Ekta Kapoor posted a birthday wish.

Ekta Kapoor's son Ravie turned one on Monday and to mark the special day, Union Minister Smriti Irani, who is also a close friend of Ekta Kapoor posted a heartwarming wish on her Instagram profile. Sharing some unseen pictures of the TV producer with her son Ravie, she talked about how she got the toddler his first doctor set and also reveals that his nickname is 'Ravioli'. Extending wishes and greetings on this special occasion, the BJP leader wrote,'Your nana Nani, mama, and brother adore you. I refuse to respond to the name Ravioli (he is a dish for sure but no way will someone make Ravioli his call sign). You are loved, Ravie Kapoor. Happy Birthday, God bless."

Asserting the fact that senior BJP leader often checks on Ravie and keeps constant tabs, just as she does at work, Ekta Kapoor responded to the adorable wish. To which Smriti Irani remarked that just yesterday, she was watching the filmmaker's attempt to feed the toddler 'a piece of cake. She concluded saying that 'no sugar and no outside food 'should be given to the one-year-old as she is constantly watching both of them. 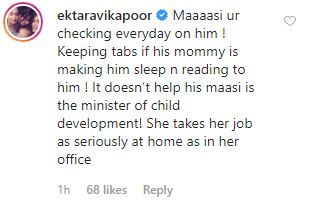 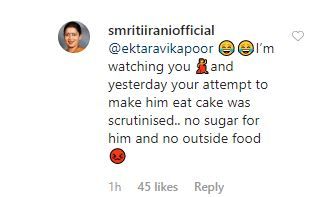 The Union Minister even shared a hilarious video about the pressure of revealing the one-year-old's face to the whole world. In the video, a Panda, labeled Ekta, can be seen dancing with excitement as a bear, labeled Smriti, hits itself on the head with a hammer, labeled stress. The Union Minister shared that she was feeling stressed over the big reveal of her BFF’s son’s face. After Smriti posted the video, her followers praised her incredible sense of humor.

READ:  Smriti Irani Shares Hilarious Meme Explaining Why She Does Not Exercise