Actor Gulshan Devaiah recently took to his Instagram handle and shared a video of Sonakshi Sinha feeding a peacock. He called her a peahen in this video.

In this Instagram Reel video, Sonakshi Sinha is spotted feeding the beautiful peacock. While recording the clip, Gulshan Devaiah introduced Sonakshi by calling her a "Morni" (peahen). The former also added the Bollywood song Morni Banke by Guru Randhawa and Neha Kakkar to the latter's video. This video was recorded at Samode Palace in Rajashtan.

Here, the Rowdy Rathore star can be seen in a casual tee clubbed with a white winter jacket, which was paired with black tights. She sported a pair of neon orange shoes and her hair was kept in a messy bun look. Sonakshi Sinha looks excited as she feeds the peacock with her hands. Take a look at Sonakshi Sinha's videos below.

Also Read | Sonakshi Sinha recites poem for farmers, says 'tribute to the hands that feed us'

Several fans and netizens commented on Sonakshi's video. One of the users wrote, "One is nature's beauty and the other is natural beauty. @aslisona", while another added, "Such a cutieeeeeeee". A fan commented on Sonakshi Sinha's video shared by Gulshan Devaiah as, "That's the National bird of India and national queen". Take a look at some more fans' reactions below. 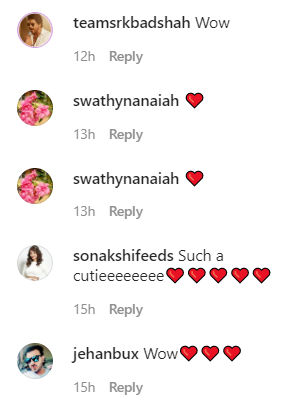 Reema Kagti's upcoming series Fallen has been grabbing attention since its inception in 2020. The cast ensemble includes Gulshan Devaiah, Vijay Varma, Sonakshi Sinha and Sohum Shah. Fallen will be released on the streaming platform, Amazon Prime. As mentioned in the Firstpost, Gulshan said that Fallen is a crime thriller surrounding a bunch of cops from the interiors of Rajasthan.

He also shared that it was his childhood fantasy of playing an onscreen cop. The entire cast was been preparing for the filming process, nearly two months before the series announcement. They did several table readings, rehearsals, workshops, discussions, makeup tests, etc, revealed Gulshan. He had also shared that he was buzzing with excitement to start filming with his 'fabulous new colleagues' Vijay, Sohum & Sonakshi.