Sonakshi Sinha joining the bandwagon of Bollywood celebrities such as Anurag Kashyap and others lauded Deepika Padukone over her visit to JNU last night.

Ahead of her much-anticipated release, Chhapaak, Deepika Padukone landed in hot waters after her seven-minute appearance at Delhi's Jawaharlal Nehru University. Back on Sunday, a mob of masked men entered the college campus brandishing lathis and rods. Vandalizing college property, the goons unleashed a heinous attack on students and faculty that led to a country-wide outcry. As Bollywood never treads into political waters, the Padmaavat star's act of doing so has gained mixed reactions. While her industry peers have lent support, several others on social media have called it a 'PR stunt'.

With Deepika's JNU visit pictures flooding the internet, Bollywood celebs such as Anurag Kashyap, Swara Bhasker and Anubhav Sinha rushed to support the actress. The latest celebrity to opine over the matter is Sonakshi Sinha. Posing several questions, the actress asked if  'violence', visuals of bleeding students and teachers' don't shake one up. Here's what she said -

No matter which political party you support,do u support violence?Don't visuals of bleeding students and teachers shake you up?We can't sit on the fence any longer.Kudos to @deepikapadukone for showing up,& all those who spoke for speaking up.This is not the time to stay quiet.

Prior to Sinha's reaction, Shabana Azmi, citing how she was attacked, pointed out that no one can come forward to lend support.  Sending ‘more power’ to the Bajirao Mastani star, Azmi added that she had shown ‘exemplary courage’ by supporting the JNU students with ‘grace.’

READ:  Sonakshi Sinha Opens Up About How She Dealt With Body-shaming

Deepika Padukone's visit to JNU amidst the imminent release of her film, Chhapaak has drawn conflicting views on social media. Sources have claimed that her visit was a part of Film promotions, a few tweets by various media organisations, with Deepika and JNUSU President Aishe Gosh's pictures, were sourced to the PR firm ‘SPICE PR’ raising more questions amongst netizens. 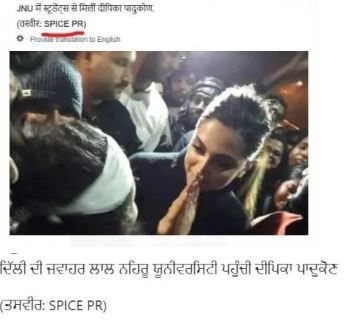