Acor Rana Daggubati who has gained popularity after playing the role of Bhallaldeva in the Baahubali franchise, made an official announcement on social media.

Acor Rana Daggubati who has gained popularity after playing the role of Bhallaldeva in the Baahubali franchise has made an official announcement on his social media account. The Baahubali actor revealed that he will soon be tying the knot to Miheeka Bajaj. The joyful news has poured in blessings for the couple from all across. Bollywood star Sonam Kapoor congratulated the beautiful pair and wished them luck for the future.

Sonam shared a picture on her Instagram story that was posted by Rana when he was finally noded a yes by Miheeka. In the adorable snap,  the couple is sharing a sweet moment under the tree smiling for the camera. The Neerja actor who is a dear friend of Miheeka congratulated the two and wrote, "Congratulations my darling baby Miheeka. I love you doll... you deserve the best. Rana Daggubati better make you happy...love you both! Welcome to the fam Rana!"

Read: Chiranjeevi And Rana Daggubati To Star In 'Venky Mama' Fame Bobby's Next? 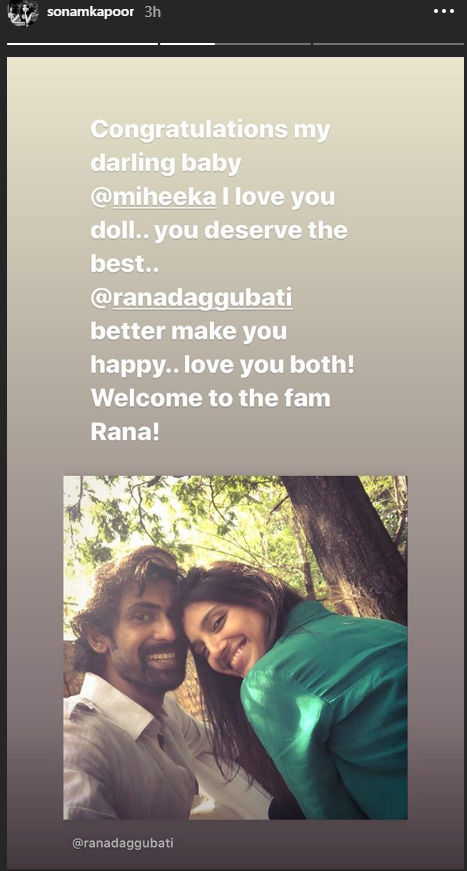 Rana piqued the curiosity of his fans and shared the exciting news on May 12 with a beautiful picture along with his fiance Miheeka Bajaj. He captioned the picture and wrote: "And she said Yes :)."(sic) The news comes as a surprise to many, who have been sending across wishes to the couple. Interestingly, not many know that Miheeka Bajaj is akin to the film industry, and is a friend to Sonam Kapoor and Rhea Kapoor, and she had even attended the former's wedding in Mumbai.

Miheeka Bajaj is a businesswoman, smitten and inspired by her mother, runs an event management company named Dew Drops Design Studio. Daughter of Suresh and Bunty Bajaj of Krsala jewels, a couture jewelry brand, Miheeka was born to an affluent family in Hyderabad. Miheeka completed her schooling in Hyderabad and has her family settled there. However, owing to her work she often shuttles between Mumbai and Hyderabad, revealed Miheeka in an old interview.

Read: Who Is Rana Daggubati's Girlfriend Miheeka Bajaj? Here's All We Know About Her

PEOPLE HAVE PLEDGED SO FAR
LATEST NEWS
View all
10 hours ago
Are Shahid Kapoor & Mira Rajput at Radha Soami Satsang in Beas? Video goes viral
10 hours ago
I pick up notes and moments from everyday life: Shoojit Sircar on his cinema
11 hours ago
Veteran Bollywood lyricist Anwar Sagar who penned 'Waada Raha Sanam' dies in Mumbai
12 hours ago
Cyclone Nisarga: Sanjay Dutt, Sidharth Malhotra urge fans to follow guidelines
12 hours ago
Varun Dhawan shares a mesmerizing view of how his surrounding looks like during monsoons