"What an innovative way to spread Coronavirus awareness by looking like a patient yourself," tweeted a fan. Sonam Kapoor reveals the truth. Read details —

Amid the ongoing COVID-19 pandemic, Bollywood actor Sonam Kapoor took to her Twitter handle to make an appeal to her fans to be mindful of a few things like avoiding train journeys and self-quarantining.

Tagging Railway Minister Piyush Goyal, Sonam Kapoor said, “Due to congestion at the railway station, there is a higher risk of spreading of the infection, so to stay safe avoid visiting railway stations or postpone your train journeys.”

But in the video, a fan pointed out that she was looking like a patient herself. Replying to it, another user said, "May be she has the "Vivid" filter ON on her camera" [sic] And Sonam Kapoor immediately confirmed by saying, "yup" [sic] 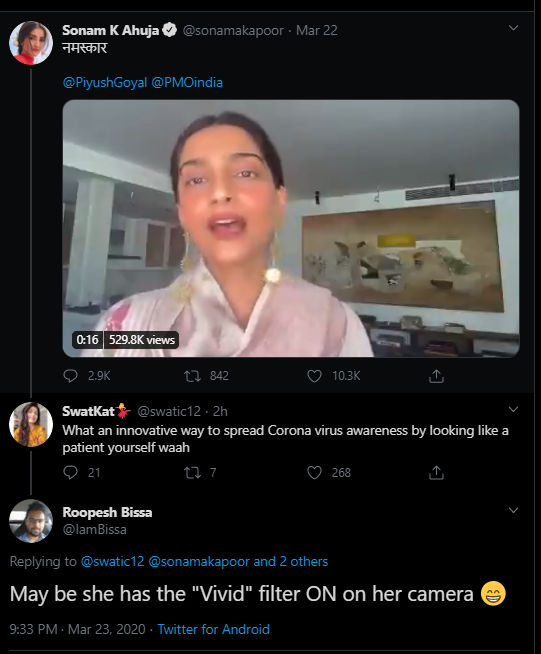 Meanwhile, a few days back, a video of Sonam Kapoor having a conversation with her mother-in-law Priya Ahuja amid Coronavirus outbreak took the internet by storm. While the Neerja actor who returned from London was seen standing near the window and Anand Ahuja's mom was seen right down there. Watch Sonam K Ahuja's video here.

The Khoobsurat actor has been spreading awareness and information on her social media accounts to fight the Coronavirus scare in India. She even came out in support of Air India employees after they released a statement for being 'ostracised'. Recently, Air India shared how its crew, that travelled to various parts of the world to evacuate stranded Indians, were being ostracized by residents and ‘vigilantes.’

These are the people who brought as back home safely. What’s wrong with people. https://t.co/hMblR2vmGp