Bollywood’s diva Sonam Kapoor is the queen of throwback pictures as she is spending her quarantine time by sharing several throwback pictures and recapitulating some old fond memories. The actress who is in Delhi with husband Anand Ahuja is missing her family in Mumbai. Recently the Delhi 6 star shared throwback pictures of her maternal grandmother, Draupadi Hingorani Bhambani also known as Duru to commemorate her death anniversary. 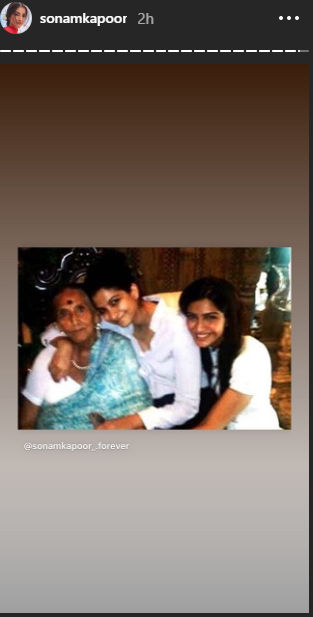 This is not the first time that Sonam has shared throwback pictures amid lockdown. The actress has been frequently updating her fans about her lockdown plans to her major missing- her girl gang. Sometime back the actress shared pictures of her bunch of friends on her Instagram whom she is missing badly during the lockdown and also expressed her desire to have a reunion. She also explained that she is dying to chit-chat with her friends and make them laugh on her no to funny jokes. Apart from this, the actress on April 28 also shared her lockdown repercussions. Sonam shared a video on her Instagram story while playing a game and wrote that her “eyebrows were in a complete mess” due to the lockdown.

PEOPLE HAVE PLEDGED SO FAR
LATEST NEWS
View all
1 hour ago
Deepika padukone reveals she was born in denmark, here're other interesting details
1 hour ago
When nora fatehi supported fans who danced to her 'o saki saki' song
1 hour ago
Nora fatehi's binge-worthy movies to add to you movie list; 'roar' to 'my birthday song'
1 hour ago
Take a virtual trip to hrithik roshan's sea facing bungalow in juhu; check pics & videos
1 hour ago
Kajal aggarwal's best memories of her travels and family time involve food; see pictures