The coronavirus has forced every person to remain inside their houses to curb the spread of the infection. This has brought more people to be active in the virtual world because that remains the only way to connect with people. A number of celebrities have been sharing posts with their partners and family members from their quarantine life. One of them is Sonam Kapoor who recently revealed one of her habits that certainly annoys her husband, Anand Ahuja. Read more to know about Sonam Kapoor and Anand Ahuja.

Also Read | Sonam Kapoor Shares A Throwback Picture Of Her 'best Trip With The Best Girls', Pic Inside 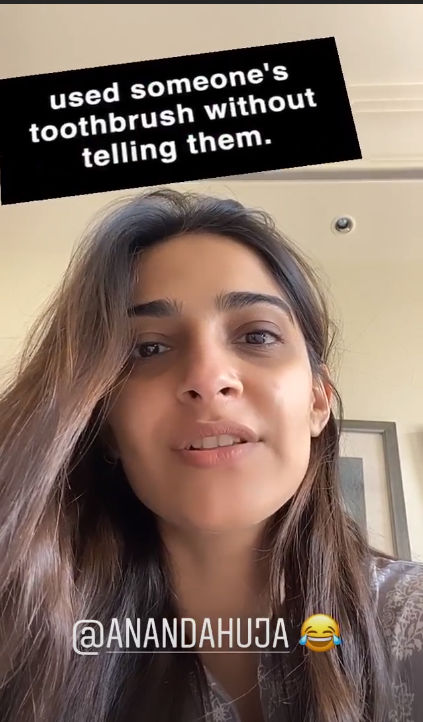 Sonam Kapoor was recently seen playing the popular Never Have I Ever game on her Instagram story. While playing, Sonam was forced to respond to, “Never have I ever used someone's toothbrush without telling them”. She replies, "Always. Anand Ahuja's. I keep using and he gets so annoyed”. Currently, the two are staying in Delhi due to the coronavirus lockdown. The two have been sharing a number of throwback posts on their respective Instagram handles. Here are some Anand Ahuja and Sonam Kapoor’s photos from their Instagram handles.

PEOPLE HAVE PLEDGED SO FAR
LATEST NEWS
View all
11 hours ago
Amitabh Bachchan reflects on lockdown, says 'it has taught more than my life of 78 years'
9 hours ago
Ananya Panday paints first unofficial poster of 'Khaali Peeli'; fans call it 'struggle'
6 hours ago
A little girl asks Sonu Sood, 'Papa is asking, will you send Mumma to Nani house?'
9 hours ago
From a salute to Sonu to 'Boycott China'; Here's Entertainment news recap of the day
11 hours ago
Sutapa Sikdar puts up heartfelt note mourning one month of Irrfan Khan's sad demise