The cop-drama, Sooryavanshi, the 4th film in the Rohit Shetty's cop universe, starring Akshay Kumar & Katrina Kaif in the lead, will release on March 27, 2020.

Rohit Shetty is leaving no stone unturned to make his film — Sooryavanshi — grand and entertaining. Akshay Kumar and Katrina Kaif who are coming together for Rohit Shetty's much-awaited film 'Sooryavanshi' were spotted at the Goregaon Bus depot on Wednesday shooting for a song. The actors were seen twinning in black and were surrounded by a huge crew of dancers. Following the typical Rohit Shetty 'killer action' vibe, the song reportedly also involves helicopters, bikes, and cars. The song is being choreographed by Ganesh Acharya. 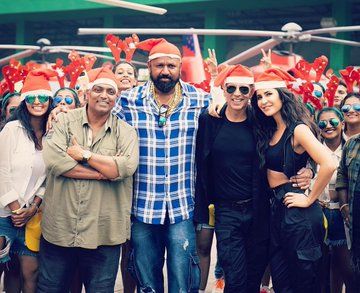 It might be difficult to meet the starcast of #Sooryavanshi but I might have got an opportunity to watch the song shoot 🙁🙁 I might have clicked some pics of #KatrinaKaif and #AkshayKumar as their is foot over bridge just above Goregaon Bus Depot 😍😍😍😍 pic.twitter.com/2UMxNnF4K7

The cop-drama, starring Akshay Kumar and Katrina Kaif in the lead, will hit the marquee on March 27, 2020. Directed by Rohit Shetty, the movie reportedly narrates the tale of an anti-terrorist squad chief, who tries his tooth and nail to futile a perpetrator's devious plan. Besides, Kumar and Kaif, the movie also features actors like Gulshan Grover, Sikander Kher, Ajay Devgn and Ranveer Singh in pivotal roles. Produced by Karan Johar's Dharma Productions and Reliance Entertainment, the movie is reportedly one of the most-anticipated movies of 2020.

Sharing his thoughts on the film, Akshay on his Instagram handle wrote: "From the day acting became my destiny, action has been my lifeline. Pure, unadulterated action in Sooryavanshi will tell you'll why it still fires up my core. Sooryavanshi" also reunites Akshay with his longtime collaborator Katrina Kaif after a gap of nine years.

Last Day, Last Shot, Last Stunt of #Sooryavanshi👊🏽 It's been an incredible experience to be a part of Rohit Shetty's Cop Universe... We’re excited for you to witness it at the cinema, it’s gonna blow your mind🤯 We hope 🤞🏻🙃 @katrinakaif @itsrohitshetty @karanjohar @reliance.entertainment @rohitshettypicturez @dharmamovies #CapeOfGoodFilms