Sushant Singh Rajput is harnessing the power of experimental technology to meditate like a 'Superman'. Check out how fans are reacting to his quirky outing.

Sushant Singh Rajput might just be a few films old in Bollywood, but the actor has very well managed to impress fans. Now that he is quarantined at home amid COVID-19 lockdown, Sushant Singh Rajput has been trying his hands on learning a new skill- Coding. And now, the Chhichhore actor also indulged in a quirky way of meditating at home.

On Tuesday evening, Sushant Singh Rajput took to his Instagram to share a picture of himself, in which he is seen wearing a professional gazing gadget and gazing at the sunset from his balcony. The actor wrote, "They claim that the way out is to look within." Rajput mentioned that he is harnessing the power of experiential technology to meditate like a superman. Check out Sushant Singh Rajput's Instagram post here.

They claim that the way out is to look within. Harnessing the power of Experiential technology to meditate like a superman :-) #yoga #emergentTech. #AI #MR #VR 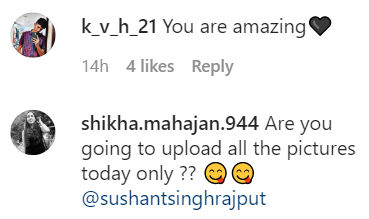 Meanwhile, on Monday morning, Sushant Singh Rajput also shared the picture a page, penned with different codes on it. The actor expressed that he always loved computer gaming and was keen on learning the language behind it. Now that everyone has time to themselves because of the nationwide lockdown, Rajput revealed that he has been trying learning coding and it looks like super-exciting to him.

I love computer gaming and always wanted to learn the language behind it. So last few weeks I’ve been trying to learn coding and it has been an extremely exciting process to say the least and yet I’m just scratching the surface.:) A special mention to ‘khan Academy’ spreading a world class and free education for all, just wow !! #coding #computerprogramming #gaming #animation #love #freeEducation #quarantinethings

The M.S. Dhoni: The Untold Story actor also posted another video on Instagram. In it, he can be seen doing clap pushups. While many of his fans flooded his Instagram post with heartwarming messages, Sushant's rumoured girlfriend Rhea Chakraborty dropped a comment with fire emojis.

PEOPLE HAVE PLEDGED SO FAR
LATEST NEWS
View all
1 hour ago
Varun dhawan shows-off his fitness game and aces 'dhanurasana'; see pic
51 mins ago
Satirist mujtaba hussain passes away at the age of 87 in hyderabad
1 hour ago
Unseen pic of the day: hrithik roshan’s audition pic from 'mission kashmir' is unmissable
48 mins ago
'amar akbar anthony' clocks in 43 years in bollywood, amitabh bachchan shares anecdote
58 mins ago
'hangover' from 'kick': this making video starring jacqueline fernandez is too cute