Arijit Singh's sluggish behaviour & inappropriate reply to Salman Khan did not go down well with Bhaijaan during an awards night. Here's what happened next.

Ever since Arijit Singh dipped his toes in the music industry with Phir Mohabbat from Murder 2, there was no looking back for the singer. His back-to-back successful chartbusters have made Arijit Singh one of the go-to singers on every producer and director's hat in the industry. Salman Khan, on the other hand, is known for his indelible casual persona. But sometimes, little does it happen that humour does not go down well with Bhaijaan. One such incident happened when Arijit Singh's behaviour baffled Salman at an awards night.

It all began when Arijit Singh attended his first award function with a pair of shorts on. The singer was reportedly busy working with Pritam for his next song but out of respect, he decided to attend the show as Aashiqui 2 had bagged him the prestigious award. Arijit Singh was working and so he directly went to the function without grooming formally.

As reports state, when the Roke Na Ruke Naina singer's name was announced, he happened to be sleeping and was then woken up by someone beside him. When Singh walked upon the stage, Salman Khan questioned him, “So gaye the kya?” to which the singing sensation candidly yet nervously expressed “Kya kare aapne sula diya.” The twist in the tale came to light when Salman Khan did not take his gesture funnily, whereas Arijit Singh realised that his ways weren't appropriate at an awards night. Here's what happened next.

As per reports, when Arijit Singh recorded a song for one of Salman Khan's movies, he was later informed that his number was dropped as the Bharat actor no longer wanted the song. Soon after which, Arijit recorded another song for Dangal which was again struck out. That's when Arijit Singh got a reality check and grasped that Salman Khan was unhappy with his behaviour at the awards night. Singh, who is not very active on social media, penned down an apology for Bhaijaan on Facebook. However, now things have been reportedly fine between the duo. Check out Arijit Singh's apology note. 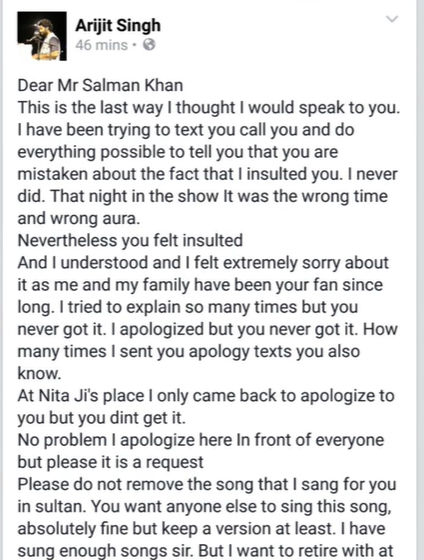 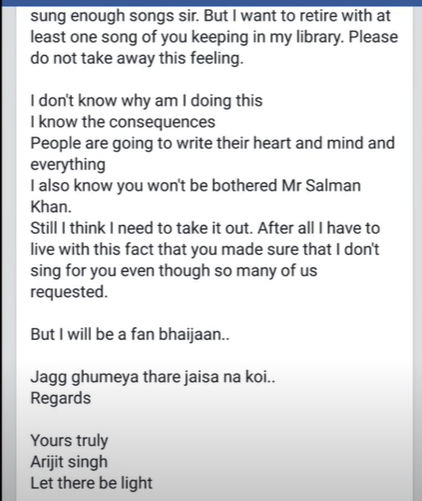 PEOPLE HAVE PLEDGED SO FAR
LATEST NEWS
View all
22 mins ago
Sonam Kapoor's 'Mausam', other Bollywood films made against backdrop of Kargil War
7 mins ago
Akshay Kumar's ₹366 Cr income makes him the only Indian in Forbes highest-paid celebs list
44 mins ago
Sonam Kapoor reveals she is a 'curious spirit child'; fans say 'old is gold'
1 hour ago
Hrithik Roshan's mega box office clashes that can't be forgotten: Kaabil vs Raees & more
12 mins ago
Ayushmann Khurrana reveals his 'One Wish For The Earth'; says 'It's time to wake up'