Sanjay Dutt's daughter Trishala took to her Instagram handle on Friday and shared a video of her grandmother Nargis' song 'Ichak Dana' from the movie 'Shree 420'. Sharing a small video, Trishala wrote, "I love my Grandma".

Nargis Dutt passed away on May 3, 1981, three days before Sanjay's debut film 'Rocky' hit the theatres. 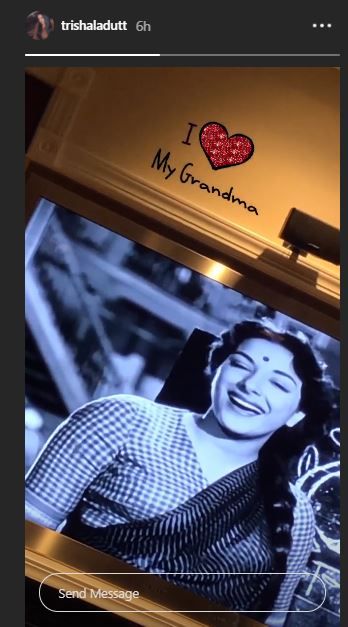 Meanwhile, Sanjay Dutt who went for a transformation with his hairdo, is all set to return to work and start shooting for his upcoming film KGF Chapter 2. The actor shared a picture of his new look on Instagram and wrote that he is gearing up for his character as Adheera in the KGF sequel.

The actor shared a series of posts on the photo and video sharing application, giving a glimpse of his preparation to get into the skin of the character as the main antagonist. He shared the same look with slightly different poses on social media. Sanjay’s daughter Trishala was the first one to leave a comment under the post with heart face emoticons. Singer and actress Sophie Choudry also poured in her heart for the look and wrote, “Yesss.”

On the professional front, Sanjay Dutt featured in Sadak 2 that  released a few weeks ago. He is gearing up for the release of two other films in the OTT platforms, one being Bhuj: The Pride of India and the other is Torbaaz.