Vicky Kaushal recently shared a post on his Instagram story, where he asked his fans to remember Sam Manekshaw on his 106th birth anniversary

Actor Vicky Kaushal will next be seen on the big screen in the biographical film, Manekshaw. The film is a biopic on the life of Sam Manekshaw, Chief of the Army Staff of the Indian Army during the 1971 India-Pakistan War. Sam Manekshaw is the first Indian Army officer to be promoted to the rank of Field Marshal of the Indian Armed Forces. Today, April 3, 2020, also happens to be the 106th birthanniversary of this iconic leader. To honour Sam Manekshaw, Vicky Kausal recently shared a heartfelt post on his Instagram story. 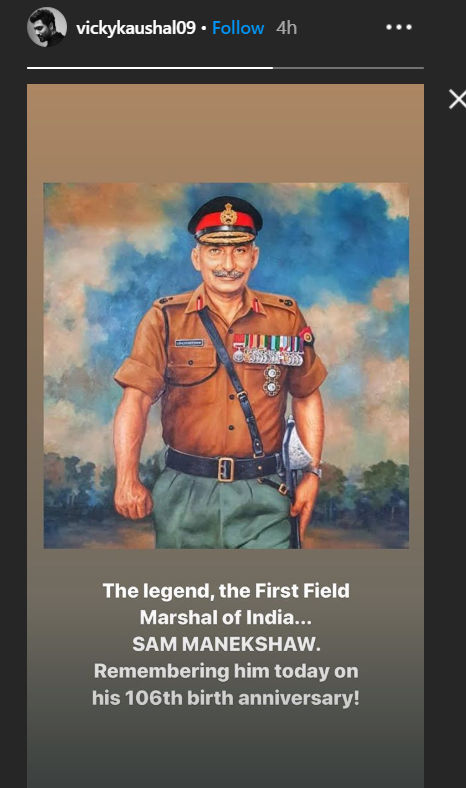 Above is the image that was shared by Vicky Kaushal on his official Instagram page. The image featured a portrait of Sam Manekshaw. He remembered the First Field Marshal of India with a heartfelt caption on his 106th birth anniversary. He was also instrumental during the Indo-Pak War of 1971 and it was his strategic planning that helped India attain a swift victory.

The upcoming biopic, Manekshaw, will feature Vicky Kaushal essaying the role of Sam Manekshaw during the Indo-Pak War. Manekshaw is set to release sometime in 2021. The film is directed by Meghna Gulzar and Manoj Bajpayee will also play a prominent role. The first look poster for the film was shared online by the director several months ago.